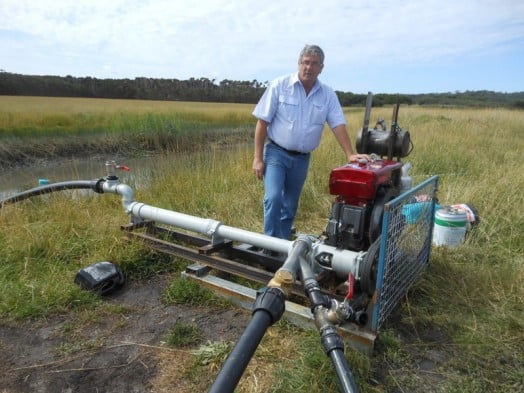 • Alex Moon, from the Yanakie Progress Association, at the newly installed pump on farmland in the southeast of Yanakie.

THE paddocks might be parched, but they have community spirit by the bucketful down at Yanakie.

The Yanakie Progress Association, largely dormant for the past few years, has been resurrected in recent months, principally as an organisation to source water for local farmers. The group has just taken delivery of a highly efficient new pump.

After two winters in succession with patchy rainfall resulting in insufficient run-off, some of the Yanakie dairy farmers have been feeling the pinch. A few farms have access to groundwater, but even this is limited.

“There’s been enough rain to grow grass, but no run-off. We’ve managed to get through on storage for the last two years, but the dams are starting to empty,” explained Alex Moon, the newly elected president of the Yanakie Progress Association.

Mr Moon said that after word started to get around that stock were in danger of going thirsty if action wasn’t taken, the Yanakie community did what it always does, and got together to solve the problem.

Yanakie was established early in the twentieth century as both a Soldier Settlement and a Closer Settlement (the main road through Yanakie to Wilsons Promontory forms the boundary between the two settlements) and has a tradition of the community pulling together to survive and thrive. Infrastructure, including tracks and fences, a hall and school, was built from scratch, initially using hand tools only. Neighbours chipped in to help one another and lifelong friendships were established. Descendants of some of the original families are there still, but even those who have settled in Yanakie in more recent decades tend to share the same community spirit.

“It has always been about farmers helping farmers,” said Mr Moon, himself descended from soldier settlers. He is proud that the community is continuing that tradition. “We’re managing to keep water to the people who need it. We’re doing it as a community with minimal outside help.”

He said that the Victorian Farmers Federation (VFF) had provided some support and Murray Goulburn Trading in Foster had been very generous with its pricing of polythene piping, but largely it has been down to the community banding together.

It was back in May that the decision was made to re-form the progress association, with a water sub-committee. Getting together to nut out how best to source water for farmers whose dams were running low, the group decided to do as they had done the last time Yanakie was similarly affected severely by drought. That was more than 30 years ago, in 1983, when a pump was set up on a swampy patch of farmland in the far southeast of Yanakie and water pumped to a holding dam on another farm.

Back in 1983, tankers from the two local milk companies carted the water from the holding dam to those farmers who couldn’t access it for themselves. That’s not practical today. Instead, several kilometres of polythene piping have been installed and water is pumped 2.7km to the holding dam and then a further 1.6km to a high point in Yanakie to which farmers have ready access.

Pumping began in August and continued steadily – running 24 hours a day, seven days a week – until recently, when a new more efficient pump was installed. It can pump 6 litres a second and is currently being adjusted, with a view to running it half as often as the pump it replaced. The aim is to keep a good supply of water in the 14 megalitre holding dam for farmers to draw from. Between the new pump and the poly piping, about $20,000 has been spent, but the money is considered a worthwhile investment to keep a community afloat.

Currently four farming enterprises are making use of the pumped water, but that figure is likely to rise if soaking rain fails to arrive any time soon. Mr Moon expects the pumping could continue for another six months.

After 1983’s big dry the rains eventually came, and no long-term solution to Yanakie’s fickle water supply was developed. “People tend to lose interest when it rains!” Mr Moon reflected.

This time, however, he is hopeful it will be different. The progress association is working on drawing up a long-term plan to sort out Yanakie’s stock water issues.

In the meantime, the people of Yanakie know that they have a reliable source of water to draw from – and a community they can count on, too