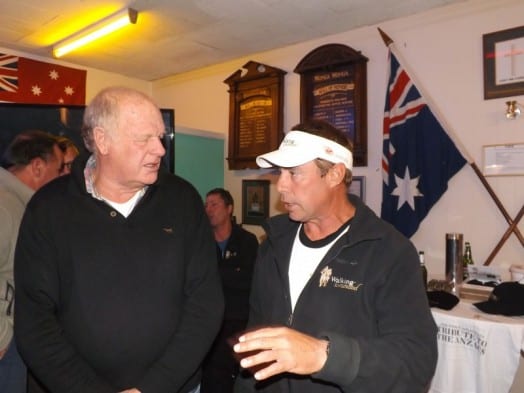 FOUNDER and CEO of Walking Wounded, war veteran Brian Freeman was guest of honour last Tuesday evening at the Foster RSL Club rooms, as he made his way to Port Welshpool to embark upon the latest leg of his epic multi-continent challenge to raise funds and awareness for wounded soldiers.

Brian and his team hope to raise a minimum of $2 million on this journey to provide suicide prevention and intervention services, counselling, employment guidance and physical rehabilitation facilities to the soldiers who come back from the war as broken men – often finding there are few to help or understand them.

The event is a tribute to all ANZACs, however most importantly to the 41 young men who lost their lives in the war in Afghanistan.

The challenge, Tribute to the ANZACs, was launched at Brisbane City Hall on March 27. Brian accepted the Roll of Honour (Afghanistan) from the Governor-General of Australia, His Excellency General the Honourable Sir Peter Cosgrove AK MC (Retd) at an event held in Canberra earlier this year.

The Roll of Honour is accompanying Brian on the entire journey and will finally be returned to the Governor-General on the eve of Remembrance Day 2015.

Brian and his team – including wounded soldiers and parents of fallen soldiers – began their quest on April 2 by escorting the Roll of Honour to Base Camp, Mount Everest.

Brian had intended to take the Roll of Honour to the summit of Mount Everest, but on May 4, after reaching Base Camp and Camp 2, opportunities to climb Mount Everest from either the North (China) or the Nepalese South were formally cancelled. It had been determined that the route through the icefall was too dangerous to allow any climbing to continue.

Undeterred, Brian continued on to the next phase of the journey, traversing Australia from the tip of Cape York to Port Welshpool on foot, covering 65km per day. He and his fellow Walking Wounded team have passed through 89 Australian towns, meeting with and speaking to people along the road and at various venues, such as schools and RSL clubs, explaining the difficulties that many wounded soldiers face upon their return home from Afghanistan and his hopes for making their lives a little easier.

In addition to speaking at the Foster RSL Club last Tuesday, Brian also spoke at the Leongatha and Koo Wee Rup RSL on the two nights prior, with strong attendance at all three venues.

The journey then continued on foot along the Great Southern Rail Trail to Welshpool, where the team were encouraged by wellwishers, including staff and students of Welshpool and District Primary School.

Brian, paddling partner John Jacoby and the Roll of Honour began their traverse of Bass Strait by kayak last Friday morning. They are making their way to Musselroe Bay in Tasmania’s northwest via Flinders Island, Hogan Island and Deal Island.

The support team and vehicles took the ferry to Tasmania. The support vehicles have been critical in ensuring safety, and providing soldiers and Families of the Fallen the opportunity to join for sections at a time.

From September 2 until September11, a team of Families of the Fallen, returned soldiers, corporate supporters and members of the Australian community will be completing the Kokoda Track and will then make their way to Mt Kilimanjaro.

“Our aim is to make a grand and lasting difference to the lives of contemporary veterans whilst honouring those people who made the supreme sacrifice,” Brian added.

Walking Wounded is passionate about providing whatever services are required to ensure the participation of modern veterans in the community.