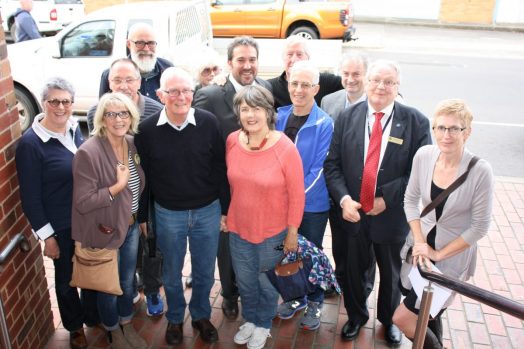 • Walking tall: members of the Hoddle Mountain Trail Management Group celebrate the opening of a section of the Fish Creek Quarry Road, along with Councillors Jeremy Rich, Andrew McEwen and Don Hill.

THERE were cheers and a growled warning as supporters of the Hoddle Mountain Trail claimed victory last Thursday (April 26).

The cheers, predictably, came from the supporters themselves, as one councillor after another spoke in favour of opening the Fish Creek Quarry Road to walkers. The growled warning came from Mayor Councillor Lorraine Brunt, who was trying to maintain order in the South Gippsland Shire Council Chambers as councillors debated the long running and emotive issue.

Cr Meg Edwards, whose partner owns a property in the area under scrutiny, removed herself from the chamber because of a declared conflict of interest.

In the end, only the Mayor and Cr Aaron Brown would vote against the trail’s opening.

In the wake of the vote, Hoddle Mountain Trail Management Group president Richard Dargaville was in a mood to party – along with a good many others who had come along to see the historic vote.

“Everybody’s who walked over the track has been blown away by it. We’ve had a lot of community support. Little by little we’ve put together submissions,” he said.

“It’s now reached the point where we’ve obviously convinced Council of the worth of the trail. I feel elated and grateful for the support of the group, and the community.”

Council received 27 submissions in support of the proposal and 38 against the proposal while it was open for community consultation. A further petition was tabled with approximately 274 signatures requesting that the section of road be retained for public use.

To mitigate any risks for adjoining farming land, fencing and gating will be required to be installed by the adjoining landowners and Council will install signage.

Cr Brunt thanked the community for making submissions to the proposal.

“I would like to thank all of our community members for making a submission in relation to Fish Creek Quarry Road,” she said.

“This decision hasn’t been an easy one as a number of community members had differing views when it came to opening the road.

“I understand that while my position was to support our local agricultural industries – which are our primary economic driver – that the Council have tried to mitigate as many concerns as possible while ensuring this asset is available to the public.”