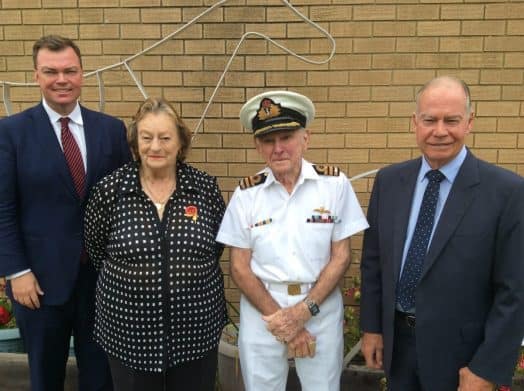 • Edward O’Donohue, Ros Bryan, Mike Lovell and Russell Broadbent at the opening of a garden honouring the Light Horse at Fish Creek RSL.

ON Wednesday March 14, Edward O’Donohue, Shadow Minister for Police and Corrections, officially dedicated a Memorial Garden in memory of the 100 years of the Light Horse.

“We gathered at the Fish Creek RSL to open the Garden created by the people on Corrections, in memory of Vietnam Veterans, and a special part of the garden to recognise the Light Horse,” said Welfare Officer for Fish Creek RSL, Ros Bryan.

Ros said in her introduction that the individuals on corrections may have made the wrong choice at some stage, but the thought and emotion they put into designing a garden in honour of those who served shows that they too have a heart.

“They have created a beautiful heart representing the bleeding heart of Vietnam, and then placed the Long Tan Cross in a cross of rocks surrounded by red roses,” she said.

“The colours of the garden are mainly red which symbolises the blood spilt, and the white roses represent our Nurses. The only Pink bush in the Garden is in memory of Sister Rosalie Wright who was killed in action.”

Ros said they were also honoured to have two very genuine and caring Politicians present on the day. She said that MP Russell Broadbent and Edmond O Donohue were both very dedicated and really care about the people they are representing.

‘The Boss’ as Ros Bryan calls him (actually ex-naval Commander Mike Lovell) opened the proceedings and introduced the guests and called on Russell Broadbent to say a few words.

Russell praised the design and work of the individuals who produced such a fitting memorial.

He spoke of the lasting pain that still touches many Australian families who have lost loved ones in all the wars the country has been involved in, and in particular the First World War for which the garden was developed.

One family present on this very important day was Wilma Jennings and her son Stephen Jones.

Wilma’s father William Jones was a Light Horseman in the 14th battalion, number 221.

She was so honoured to be at the opening of the garden and wore her father’s Rising Sun Medal in his memory.

Russell said that Ros Bryan is a stalwart of the Sub-branch and a tireless worker for veterans and the community in general.

Ros has a message to all returned and serving members of the Navy, Army and Airforce.

“We are here for you. We at Fish Creek RSL are open on Tuesdays to give you support and help.

“Please know we care. We are also available to see you on other days if you need privacy and are only a phone call away on 0418373823.

“Leave a message and I will get back to you. We know PTSD is a problem that has surfaced in families and is causing problems.

“Fish Creek RSL also provides meals, furniture and most items to help a family in the home.