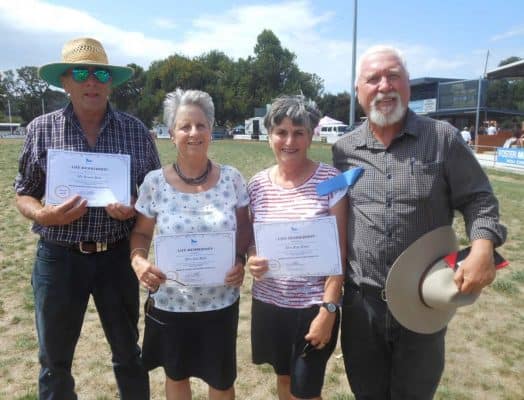 • New life members of the Foster & District Agricultural Society, from left, Bruce and Jan Best and Rae Knee with president Noel Afflitto after receiving their awards at the 111th Foster Show last Saturday.

THE  111th Foster & District Agricultural Show was held last Saturday with the threat of rain for most of the day, which in the end no doubt kept some people from attending.

With uncertainty surrounding the day, crowd numbers were down this year, but by lunchtime the Foster Showgrounds was buzzing with people enjoying what was on offer.

And it was the normal attractions that people like to see at a country show – plenty of art and craft, cookery, animals, dog high jump, sheaf tossing, horses, chooks, and the sideshow alley for the kids to enjoy.

The show was officially opened by long time supporter of the Show Jill Bradford, while three life memberships were also presented to the big crowd in front of the grandstand. Bruce and Jan Best and Rae Knee all  have contributed to the Show over many, many years, and they were very thrilled and surprised to receive their awards.

The felt they always knew what was going on, but were totally “blind sided” when their names were called out.

Show President Noel Afflitto told The Mirror that although the day was down on numbers from last year, it was well within the parameters and it turned out a very good show.

He said there was plenty of positive feedback and he said the shed exhibitions were very good in quantity and quality.

He was most impressed with the great entries of the local children and remarked at the look on their faces when they found out they had won a prize!

The local entries from the Primary School were fantastic and also the Prom Country Care craft was also great.

He said a show can’t happen unless for the tireless work of local volunteers and he wanted to name just a few – Greg Cook  from his work prior and after the show with some of the heavy lifting, Dana Hughes for her work compiling all of the results, and Rhonda Mayo from the Foster Secondary College with students in the setting up before the day.

Their work, along with many others make it happen.

Plans are already in place for next year’s show, with some good ideas coming forward, so he said it’s onwards and upwards for the 112th Show in 2019.