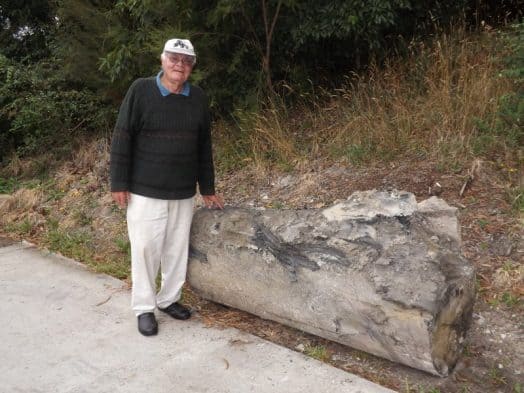 YOU never know what you might find when you start digging!

Contractors working on the Foster Streetscape last week came across a huge old tree stump under the main street when they were doing new drainage works.

Foster local identity Norm “Cobber” Sparkes who has lived in Foster for many, many years, was extremely interested in the tree stump that the contactors had found.

The perfectly preserved tree trunk was in great condition, dry and still had some bark attached to it. It was extremely heavy.

More of the same tree has also found under the road, presumably used as ballast when the original road was made. It has been decided to leave the rest of the tree or trees where they lie.

A number of locals had already enquired as to what was going to happen with it, with plans afoot to turn it into something special.

Firewood was not an option!

The work has been going along steadily in Foster’s main street and when The Mirror asked at one of their regular site meetings last Thursday, was informed that so far things are going along as planned.

There is a lot to be done, but so far the weather has been kind.

We are trying to communicate with local businesses and people as to how things are progressing, which is important. If the public can see things advancing, they seem more happy about the inconveniences.

The men who are doing the traffic control work are doing a great job, but their job could be made easier if people in the cars would indicate as to where they want to go, i.e. to park or which direction they need to go. That would help them no end!

The whole project is estimated to be completed by mid year, so there is still a long way to go, but in the end it will be well worth it. There will be some short term pain for long term gain!

In the meantime, it will be interesting to see if any more artifacts or treasures are dug up.

The Foster Chamber of Commerce reminds everyone that they are all open for business even if parts of the street are closed.

The local shop keepers believe the contractors are doing a marvellous job of minimising disruptions in what is a huge job that will have fabulous end results for Foster and that if the street parking is affected, park behind the shops in the car parks or in the new carpark.

Another option is to shop Saturdays when the workers are having a well deserved rest.