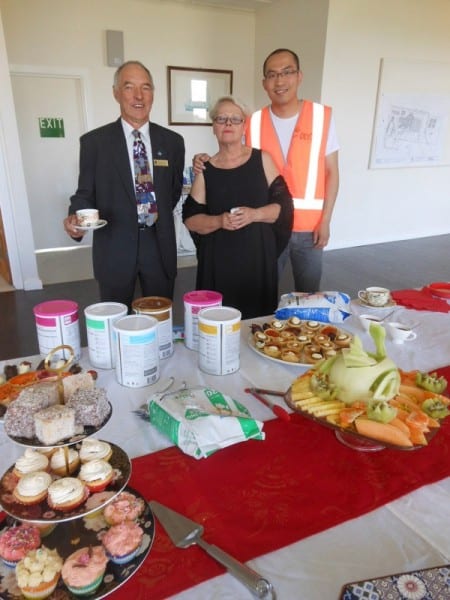 South Gippsland Shire Mayor Cr Bob Newton at Monday’s morning tea at the ViPlus Dairy factory with the factory’s admin officer Sue Harmer and production manager Dong Gang. Displayed in front of them is a selection of ViPlus nutritional powders as well as cakes and pastries made using product from the factory.

THE ViPlus Dairy factory at Toora has had a twofold increase in its workforce in recent weeks to cope with a greatly expanded product range and customer base.

“It’s wonderful for the town – and for the district,” said South Gippsland Shire Mayor, Cr Bob Newton. He was speaking on Monday at a morning tea at the factory at which guests were invited to sample cakes and pastries made using factory product. Cr Newton paid tribute to the shire’s economic development team and to fellow councillor – and Toora resident – Jeanette Harding for having faith in the factory even when many harboured doubts it would succeed. Cr Harding and the shire’s economic development coordinator, Ken Fraser, were also at the morning tea.

Cr Newton said he was hopeful that the increase in workers at the factory would have knock-on benefits, such as greater numbers at local schools and sporting clubs, for the community as a whole.

Until recently there were around fifteen full-time workers at the factory. A further seventeen staff members have been taken on in recent weeks, including eight who were inducted on Monday. From next week there will be two four-day shifts operating at the factory. The factory will need to operate seven days a week to keep up with the demand for its products.

Formerly the factory concentrated on blending infant formula for the Chinese market. Now it is developing a complete nutritional range of blended milk powders for all ages and for all over the world.

Pregnant women and lactating women are among the target markets for the specially formulated milk powder. There are also full cream and skim milk powder blends for young people after a protein boost and a special blend of formula for older people. These join the well-established infant formula range.

After initially exporting only to China, ViPlus Dairy Pty Ltd, which has a distribution centre with more staff at Clayton, in suburban Melbourne, is beginning to export to Hong Kong, Taiwan and Papua New Guinea. There are plans to export to India, the Philippines and elsewhere in Asia.

ViPlus products can also be purchased in Australia – at the duty free shop at Melbourne’s Tullamarine Airport or online at Tmall.com or the EWE agency shop.

Nobody could be happier about all this progress than Cr Harding. Speaking in Council Chambers shortly before the October council meeting, the then-mayor said she was delighted to see the factory “going ahead nicely”. There had been, she acknowledged, “a few hiccups” over the years, but the factory was now taking on more staff and was “slowly going ahead for our little town of 610 people”. Cr Harding was recently made an “ambassador” of the factory and she proudly displayed her certificate.

ViPlus Dairy’s admin officer, Sue Harmer, said that Cr Harding had long been a great advocate for the Toora factory at both local and state government level, speaking up at Council, at meetings with one-time local MP Peter Ryan and at public meetings. She is, said Ms Harmer, a very worthy ambassador for the factory.

In other good news for Toora, the old shop at the front of the factory is being given a new lease of life. The factory owner is keen to turn it into a dairy museum with a display of memorabilia chronicling the many years of dairying in the district. The building will also be renovated to become a meeting room for the Toora Lions Club. ViPlus will fund the renovation with the Lions providing much of the labour.

“It will be great to have more space,” said Lion Heather Spooner. She said the Lions would be pleased to spread out from their shed across the road.

“We’ll have a kitchen and eventually a meeting room, which we hope other community groups will make use of, too. Renovations should begin any day now.”

The factory’s newly appointed chief operating officer, Peter Cunningham, was among those enjoying Monday’s morning tea. He has been in the job for only about six weeks and will divide his time between Toora, Clayton and overseas. Most of the new workers, however, will be working on the factory floor, initially in the Blue Zone. Their tasks will include quality control of the labelling, working on the boxing machine and the lid machine, putting the product into boxes and onto pallets and putting bags of milk powder through the UV machine to ensure sterility. Later some of them will work in the secure Red Zone where the strictest hygiene conditions apply.

Some of the workers have their forklift licences already and will drive the forklifts. All will have the opportunity to drive the little motorised transporters, and there will be further training opportunities.

Ms Harmer said that most of the newly appointed workers live locally already, while at least two are moving to the area and have plans to purchase local housing.

Ms Harmer, who is clearly a Jack (or ‘Jill’) of all trades, had cooked up a storm for Monday’s morning tea – from salmon tartlets and egg and bacon pie to butterfly cakes, cupcakes, lamingtons and cheese cake. All the dairy ingredients, she said, were sourced from the factory’s milk powder products, so each item packed a cunningly disguised protein punch. From our random sample ‘The Mirror had to agree. They were all delicious and should pass the taste test of even the fussiest eater – and do them some good at the same time.