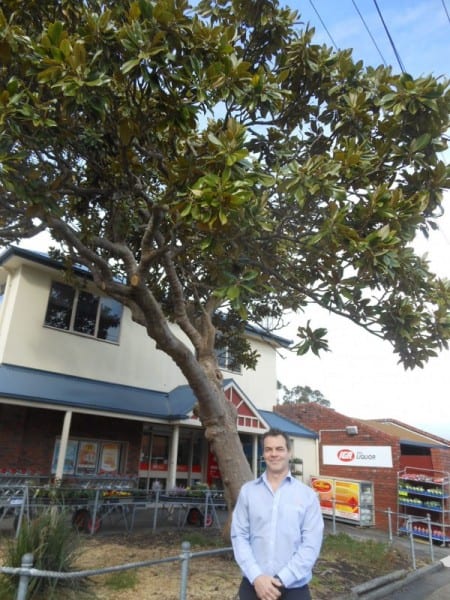 • Store manager Paul Brown under the Southern Magnolia at the front of Foster’s IGA supermarket.

THE magnificent Southern Magnolia (magnolia grandiflora) which stands at the front of Foster’s IGA supermarket holds a special place in the hearts of many locals.

Those people will be pleased to know that the much-loved tree should be around for many more years.

In the interests of public safety and to improve the look of the supermarket entrance, manager Paul Brown recently organised a visit from an arborist. Mindful of the high value placed on the tree by so many locals, Paul ensured the arborist he engaged was one of the state’s best.

The arborist made several recommendations and said if his advice was followed the tree should be good for another twenty years or so. He noted some decay in the tree and suggested judicious pruning to remove the damaged limb, lift the canopy and create more light. A local tree lopper was recently employed to carry out the work.

In his report, the arborist made recommendations for ongoing management of the Magnolia, including monitoring the lean on the tree. At his suggestion, the bench seating was removed to reduce the likelihood of people trampling the tree’s roots. Another suggestion is to have ‘sleeves’ installed on the nearby power lines, so that the Magnolia’s growth is not restricted so severely.

Paul said he appreciates the depth of feeling in the community for the tree and he is keen to acknowledge its history. He plans to reinstate a plaque which lay at the base of the tree until it was vandalised a few years ago. The supermarket is on the site of a building which once housed Foster’s post office. The plaque is dedicated to the memory of former postmaster Peter Hobson, his wife Kerrie and children Lauren and Erin, who lost their lives in a car crash in October 1994 in “a tragedy which touched the hearts of the Foster community”.

The supermarket manager is also keen to tidy up the entire garden area around the supermarket and is considering creating a welcoming public space, perhaps a deck, at the front of the supermarket, with the magnificent Magnolia taking pride of place at its centre