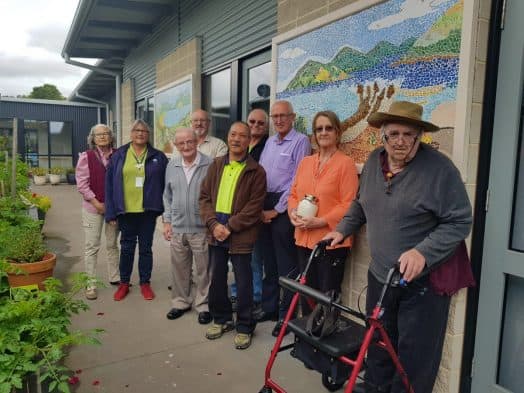 A VERY special event took place at PCAC on Monday March 5 when not just one, but two large mosaics were unveiled.

It was the culmination of a wonderful collaboration that brought together the men from South Gippsland Hospital planned activity men’s group who were commissioned by Janine Schultz of the Manna community garden over 12 months ago to brighten up the garden at PCAC.

The day was special for many reasons and one of the main ones was to honour Norm Willoughby who passed away on January 8.

“We are dedicating the mosaics to Norm,” explained Planned Activity Coordinator, Merrin Carylon. “He did the drawings for both and helped on the first one.”

Norm’s sister, Millicent Mackintosh, was there with his ashes which she scattered in the garden after the proceedings.

Acting CEO of the South Gippsland Hospital, Marion Bowron welcomed everyone then handed over to Merrin who told everyone present how Norm had done a really good job teaching the boys.

“He taught them well but was rapt when he saw the second mosaic that they had jumped in and taken over,” she said. “They had artistic flair in their own work.”

CEO of PCAC, Rhett McLennan, thanked everyone especially the boys and Merrin from the PAC group program and the community garden for making sure the residents are actively involved in gardening.

“The mosaics have a great feel for what our landscape around the local area is like. People will enjoy them for many years to come,” he said.

The names of all the men who worked on the mosaics are included on a plaque and one of the men, Butch Ireland, said that a name that was missing and that they all felt should be on it was Merrin’s.

“Merrin has been selflessly involved in this project. Her input has been immense,” he said.