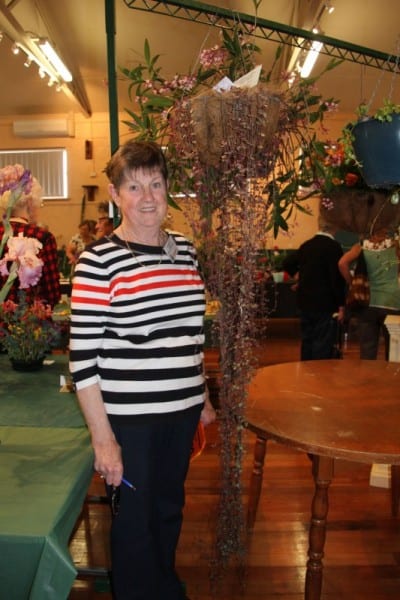 • Yvonne Austin of Foster did very well with her entries in the 55th annual Welshpool Horticultural Society’s Spring Flower Show which was held last Friday and Saturday. See Page 9 for further information and results from this popular event.

THE 55th annual Welshpool and District Horticultural Society’s Spring Show was held last Friday and Saturday at the Welshpool Memorial Hall and was a sight to behold – a testament to the determination and talent of local gardening enthusiasts who presented their flowers and produce in tip-top condition.

The organisers are very pleased with both the number of entries and with the excellent attendance on both days.

The Spring Show was officially opened by Welshpool & District Primary School principal Gabbi Boyd who congratulated the entrants on their glorious displays and praised the members of the Welshpool and District Horticultural Society on organising such a successful event.

The annual plant was a great success with very empty benches at the close of the show. Members are now planning a list of plants to replenish stocks, ready for the next show.

Organisers were pleased to see four new exhibitors in this show, exhibiting for the very first time.

The Welshpool Horticultural Society members wish to extend a special thank you to the children of Welshpool & District Primary School for their murals and display and to Margaret Haycroft’s littlies’ group at the Foster Library who created floral rainbow colours on a plate for everyone to enjoy.

The organisers of the 55th annual Welshpool Horticultural Society’s Spring Flower Show are very grateful to all to made the show such a success, including those who organised the set up the tables and displays, to the exhibitors and judges and to all those who visited the show, and to those who purchased plants – all combining to make it a very enjoyable and worthwhile event.