Home » The Mirror News » Singing in concert for an excellent cause

Singing in concert for an excellent cause 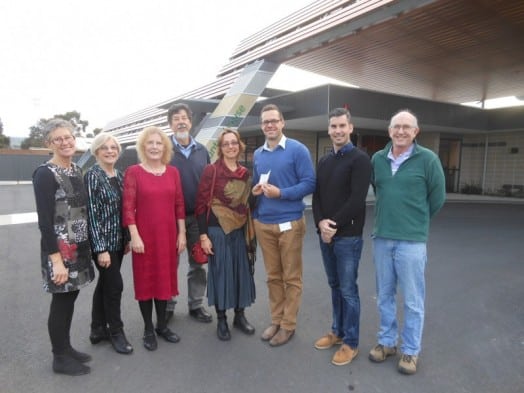 REPRESENTATIVES of the Prom Coast Singers visited Prom Country House on Monday morning to present a cheque for $500 to Prom Country Aged Care on behalf of the choir.

The money came from the choir’s Foster performance of Larry Hills’ ANZAC cantata, ‘They Went With Songs.’ Prom Coast Singers was one of several choirs participating in the performance. A capacity crowd enjoyed the concert at the Foster War Memorial Arts Centre as part of the 2015 Prom Coast Sea Change Festival in April.

PCAC chief executive officer Rhett McLennan received the cheque on behalf of PCAC, along with board member Tristan White and board member and choir member Phil Nightingall. Thanking the choir for the $500, Mr McLennan said the money was much appreciated and would go towards cabinetry for residents’ bathrooms.

Seventeen members of the Prom Coast Singers were involved in singing ‘They Went With Songs.’ The seventeen warmly invite more people to join or rejoin the choir for weekly rehearsals which are recommencing on Tuesday, July 14, under musical director Claudene-Marie Adams.

Claudene-Marie, who has been researching music for the choir to sing, says she has been hunting up “positive, energetic/ ethereal – beautiful, happy music” in a variety of styles, drawing from different eras of music – classical, jazz and modern composers.

The program may well include music by Bach and Handel alongside works composed by Cole Porter, Simon and Garfunkel and Andrew Lloyd Webber, with some gospel and jazz in the mix as well.

Choir members could find themselves singing everything from contemporary Australian works such as ‘The Seal Lullaby’ by Eric Whitacre to show tunes like ‘Razzle Dazzle’ from ‘Chicago’ and even Gilbert & Sullivan numbers – quite a contrast!

Rehearsals will be sociable and fun, vocally challenging and spiritually uplifting, as the Prom Coast Singers work towards a performance later in the year.

Rehearsals will be held at the Anglican Church Hall in Station Road, Foster. Come along on July 14 at 7.15 for a warm-up, starting at 7.30pm. The charge to participate is $6 per rehearsal.

The singers also have the exciting prospect of a weekend of singing when renowned conductor Richard Gill will be in Foster on 3 & 4 September 2016 for a series of choral workshops with other Gippsland choirs in an event similar to ‘Sing South Gippsland’ in 2011.

“Now is the ideal time to join or rejoin this friendly community choir with a whole new repertoire on the horizon,” urged choir member Jennifer Paragreen.

For more information, check the PCS website: www.promcoastsingers.org or phone 5683 2683.