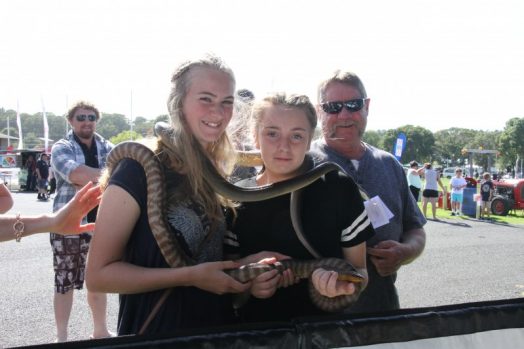 • There was literally something for everyone at the 110th Foster & District Show – including the Snake Pit where Chelsea Burrow and Brooklyn Lay of Foster each had close encounters with the reptiles.

THE much anticipated 110th Foster & District Show was held last Saturday in perfect weather, drawing huge crowds, with numbers estimated to be well up on last year.

A steady stream of people flocked into the showgrounds, each one in the running for the gate prize of a $200 bank account, courtesy of major show sponsor Toora Community Bank Branch, Foster Branch and Welshpool Agency of Bendigo Bank – but it was Beau Condon from Wodonga who won the prize!

“The Show was a huge success,” said Show secretary Roger Nicholson, who added that he and fellow committee members have received wonderful feedback.

In the lead-up to the official opening of the Show, the Mayor of South Gippsland – Cr Ray Argento spoke about how pleasing it is to see that the proud tradition of agricultural shows is still strong in Foster and warmly welcomed everyone, in particular the 60 farming families who, through the Dairy Farmers Tight Times program received tickets for the Show.

Officially opening the 110th Foster and District Show was Show stalwart Robbie Allan who has contributed enormously to the success of the annual event since the 1960s in the roles of president, secretary and groundskeeper.

There were a record number of entries in a number of categories, such as poultry, cattle and photography and the new attractions including the slot cars, the Gladiator Arena and treasure hunt were hugely popular, as was the animal nursery and mini circus.

The volunteers who make up the Foster & District Show Society had worked hard to co-ordinate a great mix of attractions for all ages, including the traditional farm animals, horse and dog events, and the horticultural produce and arts/crafts which were displayed in the Exhibit Shed.

The terrific display of vintage cars and tractors drew a lot of interest, as did sheep shearing demonstrations by Peter Gay and the mesmerizing demonstrations of whipcracking by 16-year-old Emiliqua East, the 16-year-old State Champion for Victoria, Tasmania, New South Wales and Queensland.

The Avenue of Agriculture offered a chance to speak with experts in the field of bee keeping, pig and angora goat farming.

It was difficult to find a seat in the grandstand to watch the very popular dog high jump, which was followed by novelty events such as the gumboot throwing competition and dog parade.

Roger Nicholson and Foster & District Show Society president Noel Afflitto were full of praise for their fellow committee members and the many other volunteers who worked so well together in preparing for the day, working on the day of the Show and who were involved in the clean-up on Sunday. The Society committee is also very grateful to the service club members, community groups and members of the wider community who contributed to the success of the Show