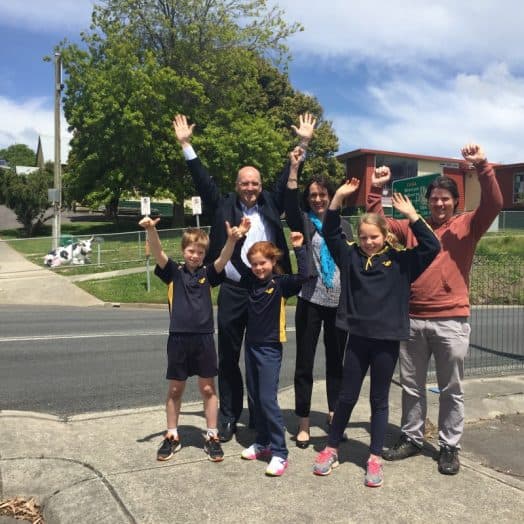 FISH Creek and District Primary School is to get a school crossing, with state and local government funding totalling $120,000 now confirmed.

The school has secured $60,000 from the TAC Local Government Grants Program which is being matched by South Gippsland Shire Council to get the job done. The council will also provide $12,000 ongoing funding each year for a crossing supervisor.

Acting principal Dale Banks said he was delighted. “It is something that is very much needed. With milk tankers, trucks, tourist traffic and local traffic all passing through Fish Creek, it can become very hectic out there in front of the school.”

Mr Banks said that the crossing had been sought for a long time.

“A lot of people have put in a lot of work to make this happen,” he said.

“I would like to thank the TAC and the shire for their contributions and the community for their support in making it happen. I hope it will be done at the earliest opportunity.”

Member for Gippsland South Danny O’Brien said he was thrilled that after two years of fighting for a crossing at the school, funding was now forthcoming and construction should begin early next year.

“I am advised by the Shire that detailed plans will now be finalised and approved through VicRoads, but that work should begin during the first term of next year,” said Mr O’Brien.

“I first got called to visit the school over two years ago when I was still a member of the Upper House to discuss an issue that has concerned students, parents and teachers for some time. The road through town is a busy thoroughfare with lots of trucks, caravans and other tourist traffic and there is poor visibility for children crossing the road to catch buses or be picked up by their parents.

“This is a great credit to the work of the school council and the entire Fish Creek community which has been campaigning for this funding for some time.

“I am very excited that it will be delivered with a contribution from the State Government after making representations to VicRoads and various ministers over the last few years.

“Our school children and parents need to be safe at the busy pick up and drop off times and I’m hopeful this new crossing will deliver the safety we need.”

Member for Eastern Victoria Region Melina Bath said it had been a long fight to secure funding for the much-needed school crossing.

“As an ex-student, the safety of the school community at Fish Creek has been of concern to me for some time and I’ve raised the issue in Parliament in the hope that funding would be secured for this crossing,” Ms Bath said.

“With a number of near misses and many speeding infringements occurring around the school it really must be such a relief for the whole school community that safety will now be improved.”