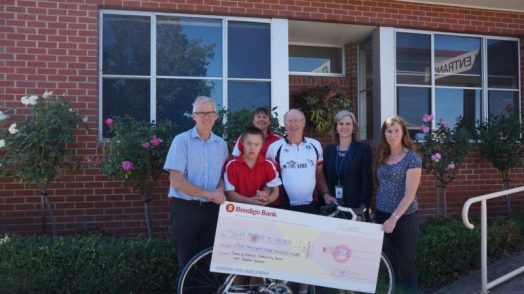 Megan Bassed and David Iser from The Sandy Point Music Club proudly presenting a cheque for $2,500 to the Doran Family members of the Murray to Moyne Cycling team raising money for South Gippsland Hospital, represented by CEO, Chris Trotman.

THE newly formed music club has now held two events at the Sandy Point Community Hall. These have both been a huge success with sell out crowds.

“The aim to provide live music to the people of Sandy Point and surrounds has certainly been embraced by the community” said David Iser.

As well as enhancing the local good will and spirit of Sandy Point the events are aimed at fund raising for groups with a local connection.

The next event on Saturday, March18 will feature Leslie Avri .

Leslie is a natural performer, whether she’s belting out raunchy rockabilly in a crowded honky-tonk or distilling her magic in intimate cabaret.

Over the years she has been invited to perform at all the major festivals throughout Australia.

A vivacious singer, she moves effortlessly from original compositions to French, Cajun, Country, Blues, Jazz, 50s Classics & Rockabilly, which all feature on her 5 CDs.

There are still tickets available for this show and can be purchased via [email protected] or contacting David Iser.