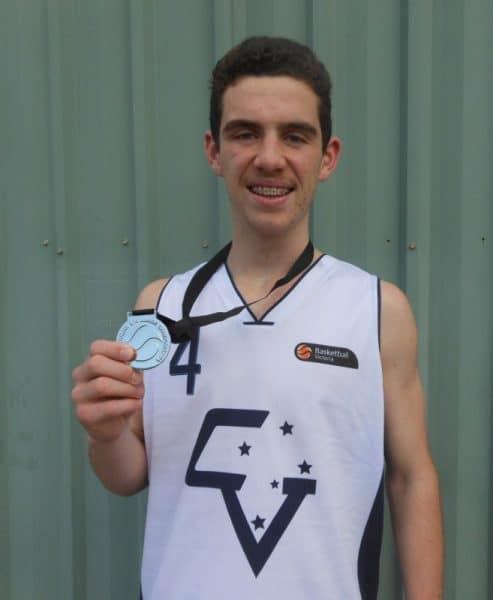 14-year-old Sam was a member of the Victoria Country Men’s U16 team which reached the grand final after a week of hard-fought competition against teams from all over Australia, as well as New Zealand.

“It was an amazing experience,” declared Sam, whose team performed brilliantly all week to earn a place in Saturday’s grand final against the Victoria Metro team. Then, in the battle for gold, the Victoria Country team was defeated by their metropolitan counterparts 76 to 67.

Sam, who plays basketball for Korumburra, after initially playing in the U12 competition at Foster, was the sole South Gippslander in the Victoria Country team.

He was buoyed by the support he got from family and friends, who were there every day cheering him on, and in the finals were on the edge of their seats!

The results, round by round, were as follows for the Victoria Country team:

In the quarter-finals VC 79 defeated NZ 68 to reach the semi-finals, where VC 62 d. the hitherto unbeaten WA Metro 59 in a very hard fought tussle. In this, one of the most exciting matches of the week, Victoria Country were 16 points down with just four minutes to go, when they recovered and stormed home to defeat WA Metro 62 to 59.

Victoria Country then played Victoria Metro in the grand final on Saturday. The Metro team was always ahead, but Country got within four points at one stage and in the end the scores were close – Vic Metro 76 defeated Vic Country 67.

Sam said he’d like to thank all the people who took the trouble to head over to Kilsyth and watch the basketball. Particular thanks, he said, are due to his mother, Jodie, and to Matt Holmes and Kerryn and Jack Heylen, who between them got him to the ten weeks of practices at Rowville leading up to the national competition.

So what’s next for this budding basketball champion? Sam will return to playing in the Korumburra Basketball Association, hoping he will continue to improve and aiming for a place in the U18 competition next year.