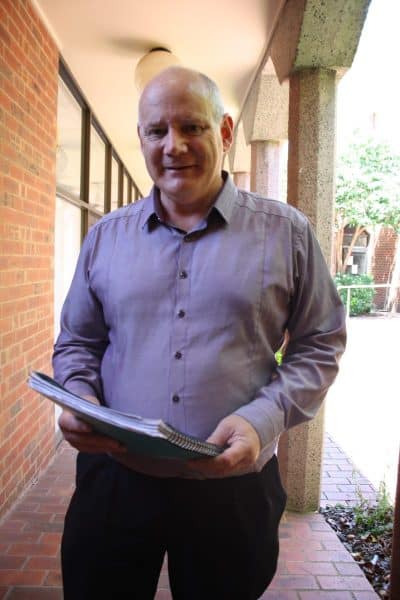 A ROAD safety initiative between South Gippsland Shire Council, Police, VicRoads, a truck driver and a pharmacist has been targeting older drivers through local Probus clubs.
According to Council’s road safety officer John Ernst – who presented his findings to Council last Wednesday (December 12) – after the age of 55 people often experience a number of physiological changes, among them deteriorating eyesight and “the ability to judge oncoming speeds and distances”.
The changes, statistics showed, were leading to accidents. Dangers were often exacerbated by medications and the rising popularity of caravan holidays, Mr Ernst said.
The team of road experts spoke to 300 local older drivers, as part of the VicRoads-sponsored program.
“The program was developed to help older drivers drive for longer. It wasn’t to put them off the road. It was just to make sure we can keep everybody on the road for long as practical,” Mr Ernst said.
He said crash accident statistic showed 18 to 25-year-olds were overrepresented, as were people in the 60 and over aged group.
Further, people in both groups were likely to crash after running off the road. However, there have been no casualties in this category for the current year.
“We think it’s to do with the treatments being done to our road infrastructure around the wire rope barriers program. What VicRoads is telling us is that they’ve recorded several hundred hits to those across Gippsland, but no recorded casualty crashes,” he said.
“They’re fixing these things, but there’s no police incident reports with these barriers. The conclusion is that they are working. Certainly, some of the overseas research that they do the job.”
Four sessions were offered through the program, with some surprises along the way.
“One of the things that scared them the most was the impact some of the medication can have on their driving. Having a pharmacist there, helped us talk about polypharmacy (mixing various medications) and some of the natural remedies, which can also impact on driving,” he said.
“The conclusion from one of the sessions was that there was going to be a lot of taxis ordered that afternoon – as people were actually questioning their fitness to drive home, which was an interesting outcome.
“The other thing that came out of it was the realisation their pharmacist can actually assist them with their road safety.”
Other topics covered included when and when not to drive. Avoiding peak hour traffic was advised.
“Caravanners have also been identified as a potential safety problem. People may not be aware, but there’s 170,000 caravans circulating around our road system and most of them are being driven by people over the age of 55,” Mr Ernst said.
“This year in the Northern Hemisphere there’s been a five-fold increase in the number of caravans represented in casualty crashes. What the police have been telling me is that a lot of those caravan journeys have originated in the southern states.
“It’s just the normal migration – getting out of the cold winter here in Gippsland. They get up North and they get into strife.”