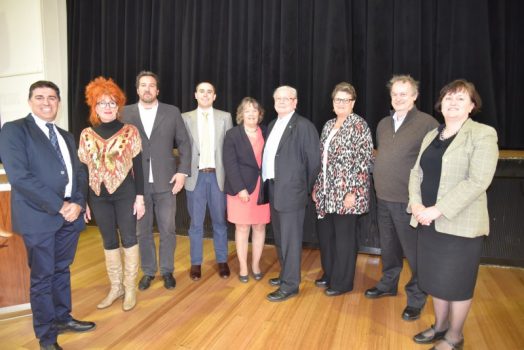 THE newly re-formed South Gippsland Shire Council gathered last Wednesday in the Leongatha Memorial Hall for the official declaration of the election results. Shire CEO Tim Tamlin welcomed the councillors-elect and introduced Returning Officer Ian Savage from the Victorian Electoral Commission, who read out the names of the successful candidates. Each was invited to speak, and overwhelmingly the councillors-elect took the opportunity to declare the best of intentions.

Alyson Skinner, newly elected in Coastal-Promontory Ward, thanked everyone who had supported her and said she was very excited to be on Council. She said she wanted to build on the legacy of the outgoing councillors. She recognised, she said, there would be a steep learning curve, with six new councillors, but she believed the councillors could work together.

Ray Argento, also in Coastal-Promontory Ward, thanked family, friends and all who had supported his campaign and said he wanted “to ensure our region grows and prospers” and was excited about the opportunities presented by being a councillor.

The third Coastal-Promontory Ward councillor, Jeremy Rich, thanked those who had supported him, particularly the candidates he had campaigned with. He said he was looking forward to making the most of the advantages of this magnificent region, both for the benefit of those who live here and for those who visit South Gippsland.

Andrew McEwen, one of only three councillors to be re-elected, congratulated the other successful candidates and thanked his supporters. He said that the results showed that the people of South Gippsland want change. He called for a collaborative approach to Council. “We need to work with the business community and the community in general with a shared vision,” declared the Strzelecki Ward councillor.

Aaron Brown, also elected in Strzelecki Ward, said he was honoured to have been elected. He said he appreciated it was not easy to be a councillor and he wished his fellow councillors all the best. “We have diverse skills and backgrounds and should work well as a team,” added Aaron, not mentioning his own background, which includes being a son of former Liberal politician Alan Brown (Victorian Opposition Leader 1989-1991) and brother of Julian Brown, newly elected to Bass Coast Shire Council.

Lorraine Brunt, one of the few councillors to get back in, said she was thankful for the opportunity presented by another term. “I’m looking forward to getting to the table and working out where we are going, with a new direction,” she said. “I’m looking forward to working collaboratively,” she added and thanked the long-serving councillors “who have left Council in a good position”. In contrast, Don Hill, the only other councillor to be returned to office, thanked only Kieran Kennedy and Jeanette Harding among the former councillors. Unsurprisingly, he made no mention of Crs Jim Fawcett, Bob Newton, Mohya Davies and Nigel Hutchinson-Brooks, former councillors whom he was always accusing of forming a majority bloc against him and his proposals. He even went so far as to express the hope that Ms Harding and Mr Kennedy would continue to make a contribution.

Councillor-elect Hill said that the new council is made up of “nine outstanding individuals who appear to be independent and have a range of complementary skills which bodes well for the future”. “We should work well as a group,” he said, adding that the shire is in an excellent financial position.

Joining Don Hill in Tarwin Valley Ward are Maxine Kiel and Meg Edwards. Councillor-elect Kiel, who has long been active in the Mirboo North community, in particular, said she felt very excited and proud to represent the community. The 2016 Shire Citizen of the Year said she already had a great relationship with the community and she was excited to have this opportunity to take the shire forwards.

“I think we have a great group of people,” said Meg Edwards, thanking all who had supported her and congratulating the other successful candidates, as well as the shire officers and the VEC for running a smooth election. Clearly referencing the dysfunctional tendencies of the last council, she suggested the newly elected councillors “learn from the past, live in the now and plan for the future”. Councillors could have robust debate, she said, but then they should get behind the decision that was reached. “Let’s make our message consistent and positive,” she urged.

The new South Gippsland Shire Council will be sworn into office and the councillors asked to sign a Code of Conduct today (Wednesday) at 12.45pm in the Leongatha RSL.

At a special Statutory Meeting of Council in Council Chambers at 10.30am next Wednesday, November 16, the councillors will elect a mayor and deputy mayor (if they wish to have one) and appoint council representatives to various committees.