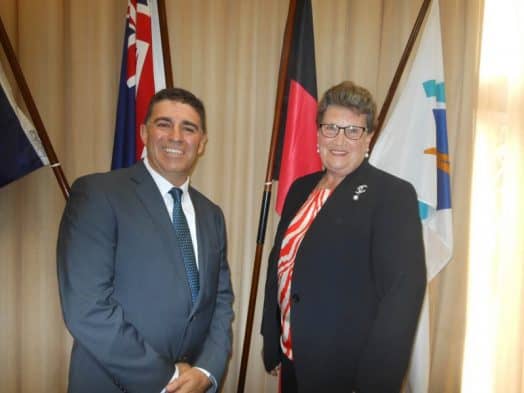 Both Mayor and Deputy have just commenced their first term as South Gippsland Shire Councillors, but both have proven track records of service to the community, Cr Argento at a high level in the CFA and for many years in the Toora community, where he owned a dairy farm until recently. Earlier this year Cr Maxine Kiel was awarded the distinguished title of South Gippsland Shire Citizen of the Year because of her service to the Mirboo North community, in particular.

Mayor Cr Argento and Deputy Mayor Cr Kiel will retain their positions for the next 12 months.

“Being Mayor is such a privilege and I am very much looking forward to working for our wonderful community,” Cr Argento said. “Most importantly, however, I look forward to working with the other Councillors as my colleagues in coming together for the benefit of the region.”

He promised to lead by example and that “our actions will speak louder than words”, adding that he hoped any critics of Council would become allies.

The self-proclaimed “loud voice in Council”, Cr Kiel said she believed her colleagues had the skills to “run a sensible Council with sensible decisions”.

“Every town has special needs and we have a strong staff base and a committed partnership that wants to be a part of the solution,” she said. “We all want to achieve great things.”

Describing herself as “passionate, tenacious and committed to making a difference”, she vowed to work as hard as she could for Council.

Cr Argento was nominated for the position of Mayor by Cr Andrew McEwen, who was one of only three councillors to be voted back in (along with Crs Don Hill and Lorraine Brunt).

Cr McEwen said the election results had demonstrated the community wanted change and the unanimous agreement on Cr Argento as Mayor demonstrated a changed Council.

“The advantage of this Council is that there are such diverse backgrounds and talents in the room, and we will work together in a mutually respective way as a high performance team,” said Cr McEwen.

The next Council meeting will be held at 2pm today (Wednesday November 23) in the Council Chambers, Leongatha.