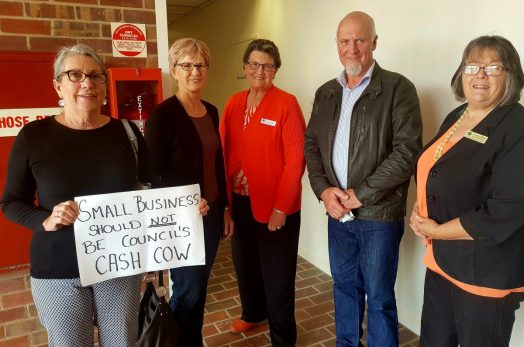 Mohya Davies holds the sign ‘small business should not be Council’s cash cow’.

AT a Special Meeting at Council Chambers on Wednesday March 21 Council voted to keep rates as they are.

Five out of the seven councillors present voted together to ensure a recision motion put forward by Cr Hill and seconded by Cr McEwen didn’t get endorsed.

Members of the public were present with local business owner John Davies holding up a placard during the meeting which read ‘Small Business should not be Council’s Cash Cow’.

Foster resident Meg Knight sits on the Rating Review Committee along with other local Ralph Gallagher and said that she applauds Council for taking extra time because everyone is impacted by rates.

She was very concerned that the ratings strategy put forward was what Cr Don Hill wanted.

“It shouldn’t be Us and Them,” she said.

Cr Kiel said the whole process was flawed from the beginning because there was not a fair representation of all affected groups.

“The group was certainly dominated by the farming sector and a lot of input was from self-interest participants and not necessarily the greater good of the wider community,” she said.

Cr Edwards said that they did not want to bite the hand that feeds them and said there must be a better way.

“There is no justification to increase rates,” Cr Brown said. “We got the balance right.

“So, I will support keeping the status quo from the previous year’s rates distribution.”

Foster resident Moyha Davies said that the ratings strategy is complicated and hard for people to understand and that Cr Hill takes advantage of that.

Cr Hill was not prepared to accept the vote and put in another recision motion and said in an email sent to media that he found events very disappointing.

“I gave this recision motion to the CEO and after leaving the meeting around 3.30pm I received an email at 4.20pm stating there was to be a special meeting of council to consider my recision motion,” he said.

”This is a travesty of governance in my opinion and I do not believe it was allowable under the local law or moral grounds.”

He and Cr McEwen gave their apologies and did not attend the special meeting held at 5pm on Wednesday.

At that special meeting Mayor Lorraine Brunt said that the reason they were there was to resolve the notice of recision.

“There is no other time we can have this meeting,” she said. “It needs to be heard today so that Council can keep to the timelines for the submission process.”

She went on to say she thought this action was a mischievous attempt to disrupt council releasing the rating strategy.

Cr Argento then added that he didn’t accept the recommendation of the rating review committee because Council needs to meet its statutory obligations and that they need to ensure timeframes are being met.

“We need to make sure our communities have ample time to respond to the 223 process,” he said.

“We don’t want to short change our communities. It’s very disappointing that Cr Hill chose this time to submit this recision, but he is entitled to do so.”

The Council will now be in a position to formally consider the 2018/19 Annual Budget for adoption at its Ordinary Meeting to be held on June 27, 2018.

South Gippsland Shire Council Mayor Cr Lorraine Brunt emphasised the importance of the new budget. “The 2018/19 Budget and Long Term Financial Plan are the key documents for Council to maintain itself as financially sustainable into the future.

“We are committed to seeing South Gippsland thrive over the next financial year and beyond and are glad to have received community feedback in the drafting of these documents.

“I hope that people will also take the time to make a formal submission as part of the Section 223 process,” said the Mayor.

“Council recognises the importance of working with the community on such important matters and hopes to build on these opportunities as the year progresses.”

The Proposed Budget, Revised Council Plan and Proposed Rating Strategy will be available on Council’s website to view once submissions open.

In addition to the Proposed Annual Budget, Council will also consider its Revised Council Plan 2017-2021 and the Proposed Rating Strategy 2018/19.

The proposed documents will be open to the public so that everyone has an opportunity to have a say on Council’s plans as of Tuesday March 27, 2018.