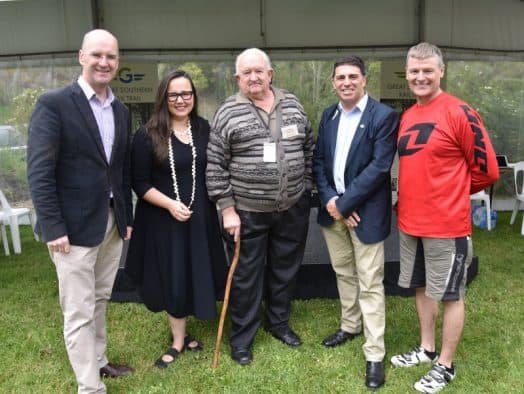 SPRING showers dampened but did not halt the celebrations marking the official relaunch of the Great Southern Rail Trail, complete with signage, at Fish Creek last Saturday.

A sizeable crowd turned up to the old Fish Creek station site, chosen because it is roughly the halfway point of the trail. Some even sported cycling gear, having ridden from Buffalo (in the case of Mick Dortmans), Foster or even Leongatha (South Gippsland Shire CEO Tim Tamlin).

The 72-kilometre length of the rail trail from Leongatha to Port Welshpool was completed some months ago and celebrated (in much better weather) back in March. Saturday was an occasion to launch the smart new logo, signage, website and brochures promoting the popular trail.

The signs are packed with information about the local towns that the rail trail passes through, including a brief history and what services are available. There’s even more information on the website www.gsrt.com.au. Visitors can download the appropriate section of the route – or the entire 72-kilometre route – so they know what to expect as they traverse it on foot, bicycle or perhaps horseback. There are brochures, too, which are updated to include information provided by local communities along the route.

Among guests at the launch were members of the rail trail’s committee of management and Friends group, South Gippsland Shire’s new mayor Cr Ray Argento and half a dozen other councillors, Member for Eastern Victoria Harriet Shing, Member for Gippsland South Danny O’Brien, and representatives of the Department of Environment, Land, Water and Plannning (DELWP) and Regional Development Victoria.

Mr Tamlin introduced Ms Shing, who congratulated the rail trail’s committee of management on the sterling effort they had put in to make the trail a reality. “There’s no downside to this project. It is becoming ever more successful,” she said, adding that she was quite confident that if the committee were to continue working at the same pace before long they would have a trail going right around Australia!

Cr Argento said that Council had made a significant investment in the rail trail project and had worked with the committee on signage, logo and pamphlets. He added that the committee deserved particular recognition for the vision its members had had so many years ago – nearly 20 by his recollection – when some, like him, harboured doubts about the project. Now the trail stretched more than 70 kilometres from Leongatha to Port Welshpool. “What a feat!”

“We now have a completed, re-badged rail trail,” said Mr Beatson proudly. “I have been told by some that it is by far the best rail trail in Victoria!”

He pointed out it is the only rail trail that starts inland and ends at the coast, the only one with such brilliant views, and the newest ‘Black Spur’ section provides a totally new vista of gorges.

“It’s all here for us to enjoy, so enjoy it we will!” declared Mr Beatson.

Mr Tamlin urged the public to go to the newly commissioned website www.gsrt.com.au. He said he hoped it would bring South Gippsland to the attention of people across Victoria, Australia and even overseas.

After the launch, The Mirror spoke to Robert and Angela Mosley, of Inverloch, who are behind the CycleWayz app. Keen cyclists themselves, their app includes all sorts of information about cycling routes across Australia. They are very excited about the completion of the Great Southern Rail Trail (which is now on their app) and invite members of the communities along the rail trail to contact them so they can update their app with the latest information as to where to find accommodation, cafes etc. Great ambassadors for the southern Gippsland area, the couple also run supported cycling tours. Go to www.australiancyclingholidays.com.au for more information.

The final official part of the day’s proceedings was the unveiling of Fish Creek’s newest fish. Thanks to the combined efforts of Fish Creek welder Ray Jones and sculptor Andy McPherson, two of the giant fish created for Melbourne’s 2006 Commonwealth Games are now flying as one in Fish Creek, welcoming Rail Trailers as they enter town from the west (as reported in last week’s Mirror).

The original designer of the Commonwealth Games fish, Ian Bracegirdle, was there to see Fish Creek’s fish unveiled. He expressed his delight that two of his fish had been renovated so beautifully (using recycled aluminium road signs) and had found a permanent home.

Former South Gippsland Shire Councillor Nigel Hutchinson-Brooks was Council’s representative on the project for many years and helped with a Councillor Discretionary Funding grant. He said how pleased he was to see the finished result. “It’s taken ten and a half years, but we’ve got there in the end!”