Home » The Mirror News » A pub with no beer

A pub with no beer 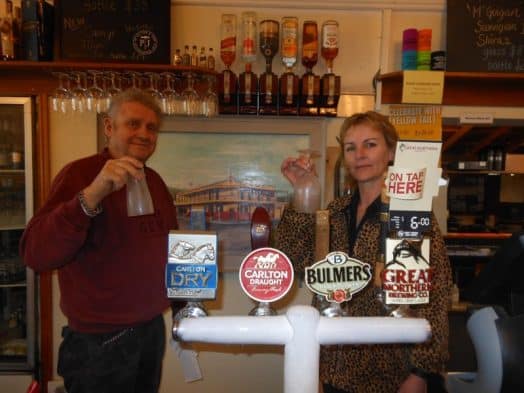 • Kerry Darby and Anthea Busuttil at the Toora pub, where you’ll find no beer, no wine, but great food and a friendly face behind the bar.

A WAVE of community support is keeping Toora’s pub going in the midst of one of the biggest crises it has faced in its 127-year history.

The pub is open for business, as per usual, only no alcohol can be served.

The situation has come about after the previous tenant of the building skipped out, trailing behind him a massive debt. He has been declared bankrupt and placed in involuntary liquidation. The final straw came last Friday week, when the liquor licence went along with him. It now needs to be endorsed before alcohol can be served at the pub. The same goes for the TAB licence.

The owner of the building, Melbourne businessman Adrian Darby, is appalled by what has occurred. Keen to set things right, he is taking measures to ensure the pub keeps operating, assisted greatly by his father, Kerry, who has the time to be on the spot at Toora. They are moving heaven and earth to get the liquor licence back and are hopeful the necessary paperwork will be completed in the next week or two.

“I’ve come to Toora to ensure the pub continues to operate and the staff can continue to have a job,” explained Adrian.

Staff at the pub number about a dozen, including full-time, part-time and casual workers, and they are all being kept on. Meals are still being served.

Adrian said he is very appreciative of the support he is receiving from the staff to get him through the crisis. He has also been buoyed by the enormous support the pub has been getting from the local community, with Amish at the Toora supermarket being particularly helpful.

“We haven’t shut for one day and we plan not to,” said bar manager Anthea Busuttil proudly. “We sold more than 60 meals last weekend, despite not being able to serve alcohol.”

She has worked at the pub for nine years, through four publicans. “The publicans change but the staff don’t and overall the pub doesn’t. It’s a good pub, with great food and a great atmosphere,” Anthea said, adding that she was very grateful that the Darbys had stepped in to rescue the pub and were standing by the staff.

Kerry Darby reiterated what his son had said. “We’re just trying to fix a problem that was caused by someone else. This pub is very much a going concern. Once we’ve got the licence sorted out – which should happen very soon – we’re planning to clean up the pub, renovate it and return it to its former glory.”

In the meantime, the public are assured that Toora’s Royal Standard Hotel – to give the establishment its full title – is open for business, and they are invited to go along and enjoy a meal – and a lemonade.