Port Franklin Fresh Fish in it for the long haul 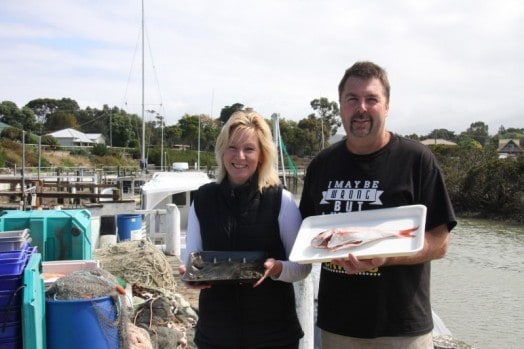 • Wayne and Linda Cripps hope to be in the commercial fishing industry for the long haul, as proprietors of Port Franklin Fresh Fish.

IT’S official! Port Franklin Fresh Fish is among the top producers of fresh fish in Australia, having been named among the Good Food Guide 2015’s Top 30 Food Producers.

This will come as no surprise to the many South Gippslanders who appreciate being able to purchase high quality fresh fish. However, the news came as a great surprise to proprietors Wayne and Linda Cripps.

“I had no idea we’d received that recognition until I was notified by the Farmers Market Association,” said Wayne. “We’re really thrilled to have received this recognition for our product – such as the rock flathead, King George whiting, gummy shark, calamari, garfish and flounder. We don’t chase too many species, but stick with what people want.”

Wayne sells his fish at four farmers markets. He frequently meets elderly people who used to catch their own fish but no longer can.

“They are my clients. They depend on me. We sell off the jetty, we do four farmers markets per month and so I have a pretty good handle on what the public want.”

Wayne is thrilled with the accolade, but he says it comes at a time when the future of fishing in Corner Inlet is looking increasingly uncertain.

“We have a good business, but its time may soon be up for us – and for the public who are the ones who will miss out if the buy-back of commercial netting licences ever takes place in Corner Inlet.”

In recent weeks the Victorian Parliament passed legislation to end commercial netting in Port Phillip Bay. Wayne fears the fishing grounds of Corner Inlet could be next.

Over the next seven years commercial net fishing will be phased out in the Bay in an effort to increase recreational catch rates and the size of fish available for anglers.

Notwithstanding the buyback means an end to their way of life, a large percentage of Port Phillip Bay’s commercial fishermen are tempted by the lure of a larger sum in the short term, as the buyback figure offered will be reduced on a sliding scale over the next seven years.

Wayne said that he had spoken with the Premier, Daniel Andrews, and only derived a measure of comfort from what he said.

“He said that it is Port Phillip this time and that Lakes Entrance is not out of the question. But he said that there is no need to change anything here at this stage.”

There are 16 out of 18 licence holders in Corner Inlet who are very active; seven from Port Franklin, four from Port Albert and five from Port Welshpool.

“The Premier said that Corner Inlet’s commercial fishermen are not going to be scrutinised.   But looking at the recent history of the bays and inlets, I think it would be naive to say that it will never happen here,” Wayne said.

“But if it does happen at some stage, we want to be last men standing in the industry here. It will be to the bitter end because we’ve built up a tremendous business here that supplies fish to the public who either choose not to, or can’t catch their own fish, and it’s my duty to supply them with the product they require. I feel privileged to have a fishing licence which enables me to do that.

“You can’t get fresher fish than what we can offer. We can have our fish back within 15 minutes on the jetty ready to fillet. You can come down and see them, select the ones you want,” said Wayne proudly.

Wayne’s family were fishermen in Cornwall who came to Melbourne by ship from England in the 1800s and fished commercially out of Tooradin in Western Port Bay. Upon seeing the potential at Corner Inlet, his great-grandfather moved to Bowen, as Port Franklin was then known. His heritage-listed house still stands there on Bowen Street.

Port Franklin Fresh Fish is a thriving business and Wayne said it could go on for many years, with the next generation already stepping up to the helm.

“It’s in our blood. It’s what we do; we’re fishermen. It’s our living. My son Lucas is a fifth generation fisherman and just two years ago became the nominated skipper of my licence.”

Lucas, he said, has plans to eventually buy his father’s licence. “But right now he feels devastated by what has happened [in Port Phillip Bay] and doesn’t know where he stands. [With all this uncertainty] there is no incentive for any young person to enter this industry.”

After a lean cold winter of fishing, the last two months of fishing here have been particularly good for Wayne and there is still plenty of calamari, King George whiting, rock flathead and gummy shark.

“Good luck to the amateurs – if they can’t catch a fish now, they never will as there is plenty for everyone,” Wayne said, adding that Port Franklin Fresh Fish can be purchased from Wayne and Linda’s retail outlet on the jetty, or at the farmers markets of Foster, Koonwarra, Coal Creek and also at the Inverloch Community Farmers Market.