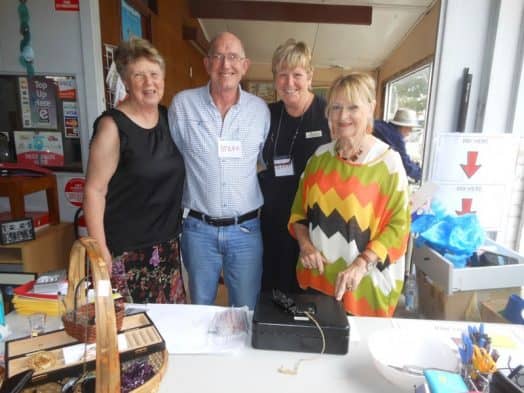 THE Pop-Up Op Shop established in Foster as an extension of the Prom Community Op Shop is proving to be a huge success.

The shop opened in the former Dower’s Garage in Main Street on December 29 and will continue to operate until January 26, with opening hours 10am to 4pm on Thursdays, Fridays and Saturdays.

All proceeds from both op shops are shared between the Linton Court Elderly People’s Homes Society Inc (which through a committee ran the old op shop in Pioneer Street for over 30 years) and Prom Country Aged Care.

Sandy Bucello, one of the driving forces behind the enterprise, said the pop-up op shop made $4000 in just four days.

“It has been an absolute huge success!” she said.

“People have been very generous with what they have donated for both the op shop and the pop-up op shop, and we have a terrific team of volunteers who man the counter and work behind the scenes collecting goods, sorting and pricing. I’d like to thank them all very much.”

Sandy said that quality goods that will sell immediately are welcomed for sale. Unfortunately, this does not include electrical goods.

The op shop sells second-hand goods of all kinds, including clothes, bric-a-brac, tools, toys and antiques. Larger ticket items are sold at the pop-up op shop.

Goods can be dropped off for sale at the pop-up shop during opening hours, or can be left at the op shop at 18 Main Street, which is open seven days a week over the summer. Eventually, it is hoped to have a central drop-off point.

For those who can’t visit either of the shops, it is also possible to purchase goods online via the ‘Prom Community Op-Shop’ facebook page.

All proceeds from sales will be shared between Linton Court and Prom Country Aged Care to improve the lives of the aged and vulnerable in the community.