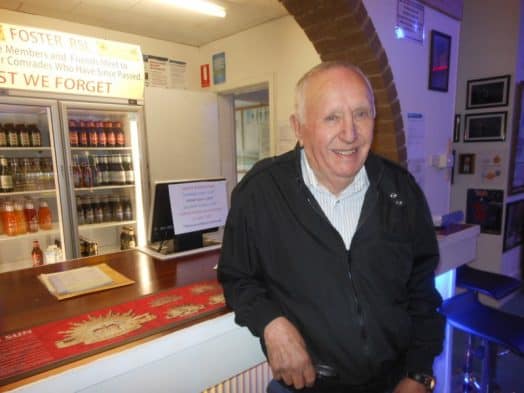 • Perce Brewer at the bar of the Foster RSL, where he is stepping down as secretary/manager to make way for a new generation.

AFTER seven years as secretary/manager of the Foster sub-branch of the RSL, Perce Brewer is stepping down to take life a little easier.

During the time he has been on the executive, Perce has taken membership from just 19, which meant the sub-branch was perilously close to closing, to a massive 350.

Perce’s successful drive for new members is just one of the many achievements in which he can take pride.

He organised the painting of the clubrooms, the installation of a new air conditioning system and, with the help of a grant from the Department of Veterans’ Affairs, the building of new toilets. He also made sure the club was incorporated and got a liquor licence, after which a bar was constructed.

The spruced up clubrooms, complete with bar, have become a popular place for members to gather on a Thursday or Friday night.

Perce refuses to take all the credit for the improvements, however. He has had, he says, a lot of assistance along the way, from the club’s senior vice-president, Jim O’Day, in particular, and also from president Bruce Lester and other committee members.

The improvements keep coming. The club now has its own card-printing machine, so membership cards can easily be run off. Doug Girvan recently supplied an endowment of books on the first and second world wars, and they will shortly go on display at the RSL for all to enjoy.

Perce says he has greatly enjoyed his time on the RSL Foster executive, but now it’s time for this octogenarian to call it a day and hand over to a new generation.