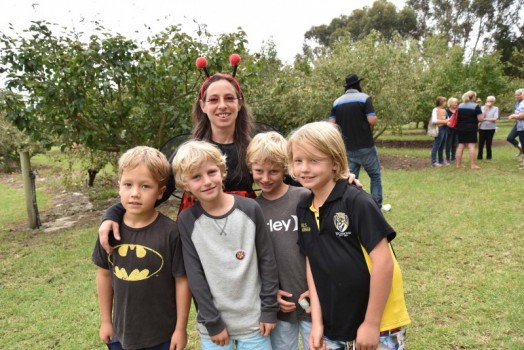 • At the hugely successful Pear Party at Toora’s Heritage Pear Orchard on Sunday, ‘Ladybug’ Sharon Jones was chief organiser of kids’ activities. She is pictured with a few of her young charges – Ned (left) and Max (right) Sheahan of Leongatha North, and Rye (second from left) and Jarrah Cicero of Sandy Point. See story and more photos in this week’s Mirror.

THE Pear Party held each year by the Friends of Toora Heritage Pear Orchard as a fundraiser for the orchard continues to go from strength to strength. Held in fine conditions last Sunday, this year’s, the 5th Annual Pear Party, was no exception.

“It was one of the best. It was very successful,” said the delighted president of the Friends group and chief organiser Meryl Agars, estimating numbers through the gate at 650 plus.

Going by the winners of the 12 lucky draws held throughout the day, said Meryl, visitors came from near and far to attend the pear party – Dubbo, Mildura and Melbourne as well as Toora, Foster and Yarram.

Pear party patrons could pick their own pears or perhaps down a bottle of pear and apple cider, made by Lucinda Estate Winery from the Toora orchard’s pears, along with apples from Leongatha. The Toora Lions Club ran a barbecue, the local primary school had a food stall and there were plenty of other stalls, too.

Face painting, story time, treasure hunts, a maze, quoits, giant chess… There was something for all ages at the pear party, with more activities than ever for littlies, much to the delight of parents, grandparents – and kids.

One of the most popular places to be was in the tent near the main (truck) stage. This was the best place to sit and listen to the various musicians performing on the stage. They were very popular, as were the other entertainers booked by the music coordinator, Dave Berry – the Prom Coast U3A Ukulele Band and the U3A Circle Dancers.

A highlight of the day was the unveiling of a plaque paying tribute to Meryl Agars and the many years of service she has given to the pear orchard – more than 15 years, including the last five organising the pear party.

Humbled by the recognition, Meryl said that thanks are also due to the other members of the pear party planning committee, Jeff Unthank in particular, but also Dave Berry, who organises the music, Megan Williams, who coordinates an amazing range of children’s activities, Sharon Jones, who leads the kids’ games on the day, and half a dozen or more volunteers who each year contribute to the success of Toora’s Pear Party.