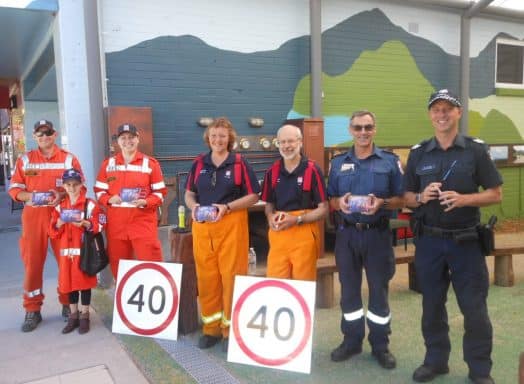 EMERGENCY Services personnel were out in force on Saturday, urging motorists to slow down when they see flashing lights.
The Foster-based “Operation Slow Down” – part of a Victoria-wide push to guarantee the safety of workers and volunteers on the frontline – saw Foster CFA, Foster Rural Ambulance Service, Foster State Emergency Services and Foster Police handing out information cards to the public.
“On July 1, 2017 a new road law was introduced to improve safety for emergency and enforcement workers,” acting sergeant Darren Lomax explained.
“The new law related to a motorist requirement to slow to 40kmh when passing emergency, enforcement or escort vehicles that are stationary or moving slowly and have either red and blue flashing lights, magenta flashing lights or an alarm sounding.
“Since this time, it has been observed that motorists are generally unaware of the new law and as such are putting the lives of police, fire, ambulance and other emergency workers in jeopardy by not adhering to the new law.”
Acting Sergeant Lomax said non-compliance by motorists was something that had been reported by all emergency services. But he believes the message will get through, with a few gentle reminders. A $242 fine for those who don’t observe the changes should help too.
“Since it is a relatively new law, education of motorists is a crucial tool in getting the public to comply with the law,” he said.
Typical of an operation involving multiple emergency services personnel, it was organised with military-like attention to detail. A briefing was held at the Foster Police Station at “0830 hours” to ensure “all persons have the correct information on the new laws before interacting with members of the public” guaranteed success.
A minimum of two emergency workers from each of the services, along with their vehicles, was enough to attract the attention of Foster shoppers on Main Street.
Acting Sergeant Lomax is hopeful the message will get through.
What it means:
·        Drivers should slow down safely when they first see flashing lights, taking into account the current road conditions and avoiding sudden braking.
·        Reducing speed, even if the vehicle does not get down to 40km/h, will still have safety benefits for law enforcement or emergency workers and will help drivers take evasive action if needed.
·                 A ‘safe distance’ has not been defined in the road rule because every incident will be different. It is the responsibility of all drivers to be aware of the individual circumstances of each roadside incident and to drive accordingly.