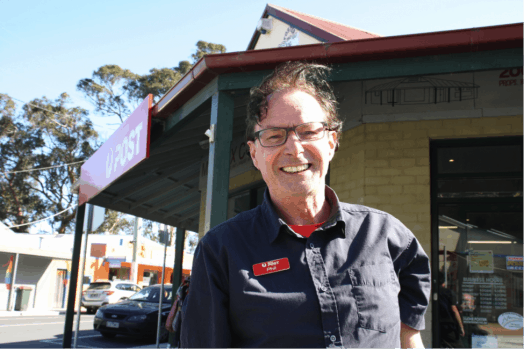 Phil Rerden: the Foster Chamber of Commerce president believes the Foster & District Show will come back bigger and better than ever.

THE Foster & District Show is ready to go into hiatus – with the committee voting at last night’s meeting (Tuesday, October 9) to have a year’s break and stage the event again in 2020.
Speaking to the Mirrorlast Friday, president Noel Afflito said that while a secretary had been found – a prerequisite for rescuing the show – there was too much to do before the February 2019 event.
Mr Afflito was keen to keep the identity of the new secretary under wraps for the moment, but said she brought both experience and vitality to the role.
He said the committee would take a “fresh approach to sponsorship” and promotion for the 2020 event.
“Because of the fact we haven’t had a secretary for some months, there’s a backlog of work that needs to be done just to keep things on an even keel,” he said.
“We should be a long way down the track in the organizing of the 2019 event. And we’re not. We’re behind. Rather than put on a show that’s not up to the standard of which we’d like, and perhaps suffer on a cultural and financial basis, we’d rather go into recess for a year.
“We’d rather reset, refocus, set some new goals and work toward something special in 2020. We’re an open-minded group and we’re always looking for new stuff to do. There’s a lot of life in the show yet.”
He said Foster’s was “a good show, a vibrant show”.
“We’ve actually changed with the times. We’re always trying to be true to our rural roots. We’re going to come back with all guns blazing the following year,” he said.
The idea of moving the event to Stony Creek has been talked about, Mr Afflito said.
“It was mentioned that they’re trying to turn the Stony Creek Racecourse into an equestrian centre and maybe we’ll look at relocation there as an option,” he said.
“But the reality is, I don’t want to move from Foster and there’s a lot of people who don’t want to see us go. It might make sense, but I’m 99 per cent certain we’re going to stay in Foster.”
Foster Chamber of Commerce president Phil Rerden said he empathises with the committee and believes the 2020 event will be something special.
“It’s very disappointing for the town, not having the show in 2019. Unfortunately, all volunteer groups are struggling to find volunteers, because we’re all exceptionally time poor,” he said.
“Every event has a positive effect on the town. Therefore, we’re not going to have that positive effect that weekend, which is sad for the town.
“But, I, as a trader and a member of groups, understand how hard it is to put such a big event together.  The hope would be, from a traders’ point of view and the point of view of the families of Foster, that the show will happen again in 2020.”
Mr Rerden said it was good news a secretary had been found for the show.
“I think 2020 will be a big year for events in Foster and the Chamber of Commerce will be strongly behind other groups hosting events. Certainly we will look to help the show committee,” he said.