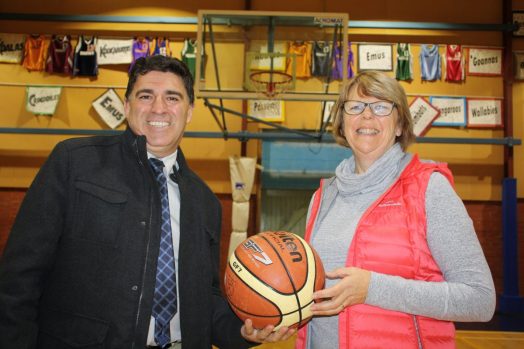 THE South Gippsland Shire Council has voted to apply for $1 million in funding to help revitalise the Foster Indoor Stadium.

According to Foster Showgrounds Committee of Management secretary Deb Eales the potential windfall would be a “dream come true”.
Councillors unanimously supported a motion on Wednesday, June 27 to apply for State Government funds for the refurbishment of the Foster Indoor Stadium Redevelopment project. A further $1 million will be committed by Council under its Long Term Financial Plan.  While no-one is holding their breath, Cr Ray Argento said the Foster facelift was well overdue and the project was shovel ready. Competition for the grants are fierce.

“It would be a payback of 15 years work, to start off with and it would bring so much opportunity to the community to use this facility,” Ms Eales said.

The project would provide change room facilities that meet Basketball Victoria and Netball Victoria guidelines, along with a fully compliant basketball court dry programs area. The foyer will be redeveloped to provide multi-use spaces and accommodate the U3A.

“Instead of it just being a basketball stadium, it could be a community facility. That’s the basis of the whole thing. Basketball’s really important, but there’s also the need for other groups within the community to have a home and a space,” Ms Eales said.

“It would actually meet its potential for the community.”  Ms Eales identified U3A as a group that would definitely benefit from the redevelopment.  “They’re intent on getting a space they can just call their own. They’ve wandered around like gypsies for so long,” she said.
“They’ve been as nice as you can expect them to be about it, but they deserve to have somewhere they can run their classes that is comfortable.

“U3A are a big group that would be serviced by it well, but there would also be an opportunity for groups to use the meeting rooms too. It would just serve the community better.”

Cr Argento, who is also on the showgrounds committee, said the search for funding had “been going on for a number of years”.

“We’ve been trying to work out ways to increase the floor space and update the facilities. It’s a tired facility now and it definitely needs to meet today’s standards of what’s required in a community recreation reserve facility,” he said.

“There’s a lot of things happening here, from gymnastics, badminton, basketball most nights of the weeks – and that’s just a few of the things.”