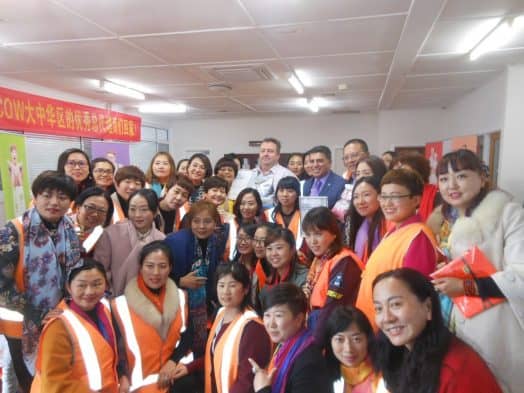 TOORA’S ViPlus Dairy is ready to go into overdrive, with an order for 20 million kilograms of milk powder for major Chinese player Oz Cow.
At an official ceremony last Wednesday (May 23) – attended by 45 Oz Cow sales representatives, Oz Cow’s Chen Hou Ming, ViPlus operations manager Darren Humphries and South Gippsland Shire Council’s Cr Ray Argento – the contract was signed.
The product will be sold in Asia as Oz Cow’s one-kilogram skim milk and whole milk powder.
“We’ve signed a contract for 20 million one-kilogram bags of milk powder over the next three years. It’s the third time the Oz Cow sales team has come over. Every time they’ve been here and gone back, their sales have jumped incrementally,” Mr Humphries said.
“There’s a core group that comes each time, but there’s also a newer group. It’s all about allowing them to see the factory and see a local farm. They’ll look at a dairy milking operation.”
Much of the information gathering mission is about demonstrating the region’s bone fides as the best place to produce dairy products. The company’s skyrocketing fortunes means a second shift of workers has been employed to see the Oz Cow sales order is filled.
“We’ve just put on 18 staff in the past five weeks, bringing us up to 60 – and they’re all locals, all within this area. As far as that goes, it’s great,” he said.
“The can lines are going well. So, business is ticking along quite nicely. The majority of our product goes to China, but we’re branching out. We’ve got streams into South East Asian countries now.
“We’ve had a stream into Vietnam for the past couple of years, but we’re also moving into Hong Kong and countries in the Middle East. Earlier this year we sent over a quarter of a million bags to the Middle East and we’re looking at cans and other products.”
Mr Humphries said ViPlus was looking at establishing sales offices internationally to “help facilitate the growth”.
He said ViPlus was currently buying its powder from local suppliers and dry blending it (mixing dehydrated food products to maximize nutritional value and taste), but there are plans in the future to have “spray drier operations” (producing powder directly from milk) at the plant.
“We’ve only developed the back half of the factory since we’ve been here, adding a 4000-metre square warehouse onto the back as well,” he said.
“I’ve been here two and a half years. When we started we had one product line, now we’ve got three others – plus robots, robotic packing and we’ve just ordered two more bagging machines, plus three more robots to facilitate everything.”
Mr Humphries said South Gippsland was renowned for producing a top shelf product.
“The pastures here are great. It’s just a really good area for dairy,” he said.