Little boy saved thanks to speedy attention from ambulance officers 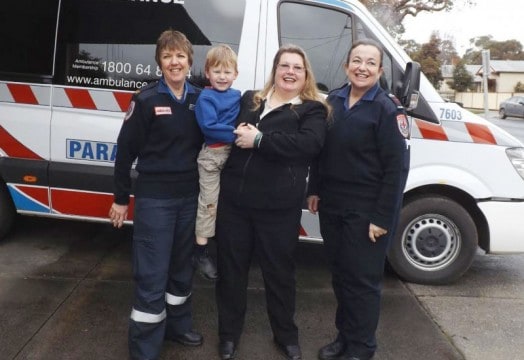 IT CAN happen anywhere, at any time, to anyone. Suddenly you, a loved one, a friend, or co-worker is desperately in need of an ambulance. A call to 000 is made and an ambulance soon attends with highly trained professionals ready to assess, treat and/or transport.
We are extremely lucky to live in a country where such a wonderful service is in operation, as young Alastair Tuckett of Buffalo and his family discovered on June 5.

Over the course of a night, four-year-old Alastair experienced an increase in body temperature and by morning, was in extreme pain. His mother Katrina Benson dialled 000 and in less than 30 minutes the ambulance arrived, with Ambulance Community Officer Christine McAuliffe and Ambulance Victoria Foster Team Manager Leigh Nichols-Thompson on board.

“I was so grateful for the care they each took – not immediately pouncing on him, but keeping him calm, comforting him as much as possible while assessing his needs. I was blown away by Christine and Leigh’s professionalism and level of care,” Katrina said.
‘We did a full assessment including blood pressure, pulse, temperature and breathing and it was clear he needed some aggressive treatment in hospital,” Leigh said.

Critically ill, Alastair was rushed to Monash Medical Centre which has a dedicated paediatric ward with specialist care.
There, he underwent surgery for a ruptured appendix, which can be a life-threatening condition. Alastair’s case was particularly severe and one of the worst the surgeon had seen.

‘He had surgery not long after arriving at Monash Medical Centre so we are thankful for the paramedics decision-making and how they reassured us,’ Alistair’s mother said.

He was released after 10 days in hospital and has made a full recovery, much to the relief of parents Dave and Katrina.
“We just can’t thank Ambulance Victoria enough,” said Katrina, who wrote a beautiful thank you letter and delivered it to the station. Katrina made a return visit last Friday with Alastair and Dave where the family met with Christine and Leigh to personally thank them for what they had done.

Why not become an ACO?

“We are all wives, mothers, daughters, husbands, fathers, sons, and partners – just like those we look after – and as paramedics and ACOs care deeply about them and always wonder about the outcome of each case,” Leigh said. “We look after them as we would wish our family members to be looked after – with care and compassion,” she said, adding that those members of the community who feel that they would share that compassion may be interested in joining with Ambulance Victoria as an Ambulance Community Officer (ACO).

“We need more people to put their hands up and get involved to help locals in their time of need. ACOs go through an initial training program which covers clinical aspects of the role as well as driver standards and manual handling techniques. This is followed up by regular monthly sessions to build upon what has already been taught.

‘ACOs are required to commit to a minimum 21 hours of clinical training per annum, held monthly, over three hours. ACOs are members of our community, have a genuine community spirit, and an interest in patient care.  ACOs may be employed, self-employed, not working or semi-retired,” Eddie Wright explained.

Leigh said Ambulance Community Officers made a significant difference and that having an ACO on board was an enormous help in managing the case of the four-year-old boy from Buffalo.

“Without Christine’s help it would have been much harder to assess and treat the boy and make the decision to transport him to Monash Medical Centre.

ACOs are required to be available for a minimum of 20 hours per month which may involve after hours and weekend rostering.  As a casual employee, remuneration is available for all training sessions and emergency call outs attended.

“You don’t need a medical background to become an ACO as there is supported training to teach you everything you need to know and this is done at a level that everyone can understand,” Leigh said.

Leigh said that many people see an ACO as purely a driver, but there is so much more to the position than that. They possess an amazing skill set which helps support the paramedic and those in the community.

There are currently have 10 ACOs at Foster but Leigh would really like to see at least five more join to provide extra support and representation of a larger cross-section of the local community. The ages of the current ACOs range from 25 to mid 60s, but as long as you have a sense of commitment, you will need to undertake a police check reference check, a medical assessment and have a driving license
Leigh explained that the training is scheduled to be adaptive to the members of the group and that the rosters for being on call are made taking into account the availability of the ACOs.

Whether you are considering a possible career change or just want to help make a difference in the community, why not apply to become an ACO and join the team at Foster? For further information, call Leigh on 0438 794 035 or drop in to the Ambulance Station in Station Road, Foster.