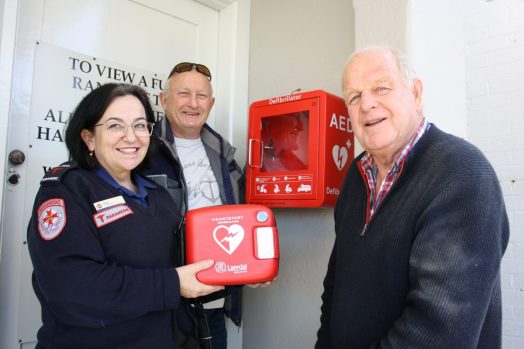 FOSTER now has a lifesaving public access defibrillator in Main Street, right outside the RSL.

The collaboration between Ambulance Victoria Team Manager Leigh Nichols-Thompson, the Foster RSL and Foster Rotary looks set to be emulated across the region, with a number of other South Gippsland towns ready to put their own machines in prominent public spaces.

The $3000 for the purchase of the machine was raised with takings from a Foster Rotary wood raffle. Indicative of the hands-on nature of the project, it was Foster RSL vice president Ian “Bones” Sutton and Foster Rotary community services director (and RSL committee member) Bruce Lester, who drilled holes in the wall of the building last Thursday (May 31) to see the machine was correctly mounted.

Leigh believes public access defibrillators are an essential addition to any town.

“In effect public access for defibrillation has been around for many years. There are around 15,000 purchased in the state, but there was only 3951 at last count that were ‘public access’,” she said.

“Many are owned by football clubs, bowling clubs and other sporting clubs – but are only available when people are at those places.

“One of the fallacies is that they’ll be vandalized or stolen. On average, every 18 months to two years one is lost or stolen. With close to 4000 public access defibrillators around, I think those stats are pretty good. A lot of them are in high traffic areas too, like Southern Cross Station. I think Foster is a very safe town, so I don’t envisage any problems.”

She said the easy-to-use defibrillator (it actually talks you through the procedure, with the operators at 000 ready to help too) could be a “vital link in the chain of survival” for anyone having a cardiac arrest.

Leigh stressed that the machine was also safe.  More signage is planned to let everyone know exactly where it is, with the Foster Information Centre likely to play a part.  “Education is the key,” Leigh said.