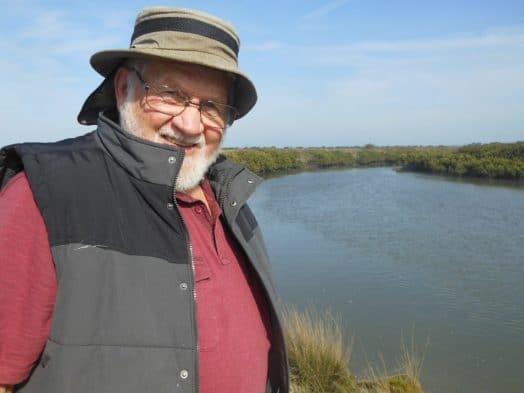 • Fred Weight: the nature-loving, boat enthusiast wants to see a launching site for boats half a kilometre east of “The Landing”.

FRED Weight has a dream.

Mr Weight wants to see the establishment and maintenance of 24 hour boat launch facilities at “The Landing” – the tidal section of Stockyard Creek at Foster that feeds into Corner Inlet.

“In presenting this submission, I am requesting that the South Gippsland Council assume management responsibility and develop, refurbish and extend the boat launch facilities,” the Foster resident told councillors.

“It is further requested that, as manager of the development, the Council source all necessary funds, approvals and similar matters, in such a manner as to allow this development to proceed as quickly as possible, so that the facilities may be enjoyed by the public.”

The following day, The Mirror travelled to the site with Mr Weight. In many respects, it is something of a hidden jewel. And like the history of its heyday, it has been largely forgotten. A concrete boat ramp at “The Landing” is rundown, inadequate except at high tide, and, according to Mr Weight, built in the wrong place. The small jetty, is, likewise, falling to pieces and arguably a potential safety hazard.

“In the 1860’s, the steamboat captain who brought diggers to the Foster goldfield was only interested in getting as close to the diggings as was possible. Even then the diggers had to bush-bash through thick scrub a further three or four kilometres to the diggings,” he says.

“At that time, it did not matter that the site was only accessible at high tide, so that is where the government built a wharf and the focus was on that point. Until now, the focus seems to have remained on that point.”

Like those formidable men of yesteryear, we too bush-bash (by car and foot) half a kilometre east of this site, to a bend in the creek that is wide and deep. It’s the spot where Mr Weight wants to see a newer launching site built, opening up what he believes could be a major tourist attraction. It’s easy to understand why he would think so. The scene is breathtaking.

“By building a new facility at a site downstream, much closer to Corner inlet, everything changes,” he says.

He knows planners would need to consider the Ramsar convention on wetlands, Indigenous culture and heritage issues, safety issues and provisions for people with disabilities. There is the issue too of who owns a swampy strip of land near the creek’s banks. Part Crown land,

Mr Weight said he could not establish if the remainder also belonged to the Crown or was the property of a local farmer or Council. Under his plan, the land would serve as car park for visitor and an entry point to any future launch site.

But he sees the creek as a place that would open up opportunities for everyone, including traders and tourist operators. Most of all, though, he wants people to have access to a beautiful part of the world that has largely remained hidden since gold diggers pulled up stumps in the late 19th Century.

“This is where I’d like to build a proper ramp,” he says wistfully, looking to the waters.

You can see in his eyes that he has a vision of canoeists, fishing people and nature lovers all basking in the glory of a place that time forgot. Build a launch site, he reckons, and they will come.