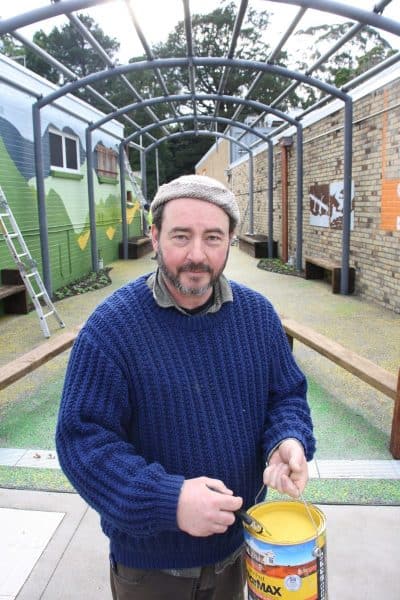 • David Bell: the designer and primary artist for the Foster laneway is excited at the transformation.

THE transformation of the laneway between Foster Foodworks and Foster Seafoods is continuing apace, with a roof scheduled to be attached in the coming days.  A frame is already in place.

Designer and primary artist David Bell, who has overseen the works, is excited about the continuing metamorphosis – not to mention his vision of what the lane will eventually become.

Eventually, it will serve not only as an attractive walkway, shelter, picnic place and kids’ play spot, but a mini concert venue for local artists and music lovers.

Speaking to The Mirror late last week, David said the colourful yellow and green rendering of South Gippsland’s famous hills along one wall would not be a mural, as some may have believed. Rather, it will serve as a backdrop to “aluminum composite photographs of local beauty spots set on boards”.

The wall will have “interactive” attractions for children too.

“We’re planning to have port holes and dials to entertain the kids. Something a bit boaty. It’s a reference to the fish shop and just something for kids to muck around with while adults are sitting here having a cup of tea,” he said.

David said there were also plans to have a map of the area on the opposite wall, pinpointing where the photographs were taken. The map would be an object that clearly illustrates the vast and varied beauty of the region, but a practical pointer for tourists too.