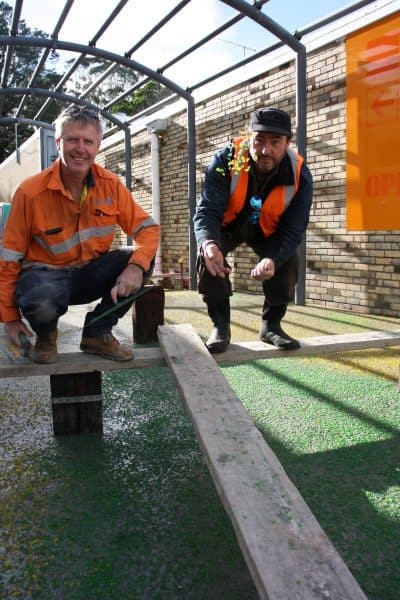 IT was a marvel to behold.

Under the watchful eye of designer and primary artist David Bell, the laneway between Foster Foodworks and Foster Sea- foods, made a remarkable transformation last Thursday (June 7). Not that the team helping David realise his vision needed much direction. The boys from PFC – the construction and concreting company hired to undertake the job – worked in perfect synchronicity, laying concrete in the first instance and then adorning it with green and gold glass – scattered with the twin elements of countryside and sand in mind. Given Foster’s prominence as the gateway to the Prom, David believes the colours have potent symbolism.

“This process started four years ago when I put forward 10 concept designs for this lane. This was the design that really resonated with people at that time. It was quite an exhaustive process. And these guys are starting to make it happen,” he told The Mirror.

“We didn’t just want plain concrete. We wanted to seed some colour through the lane and give it a bit of bling. We’re going to put lots of little fairy lights up in the roof, so they can bounce off the glass.

“We’re using four colours here. Two yellows and two greens. Then there’ll be a u-shaped seat here that will form an informal stage for street performers and for the choir when they set up here.”

David said there would be power points to allow performers to plug in amplifiers and mixing equipment.

“On the supermarket side we’ll have a board featuring current events for Foster. We hope that tourists will stop here, sit down, read that information and take some time out.”

He said the lane would be part of a walkway that would also include a zebra crossing on Main Street. The crossing, due for construction on Monday, June 11 or Tuesday, June 12, would serve as a connector to a laneway on the other side and an easy access point to the centre of town.

“This will link the two lanes, creating a sense that this is the centre of town. We want people to have a feeling that this is where they should stop,” David said.

“Then they may go on to Pearl Park or they may stay here and chat. This will be something a bit special.”

PFC manager Peter ‘Faz’ Farrell said the job wasn’t a simple one – with multiple washes and two coats of sealant to finally complete the work.