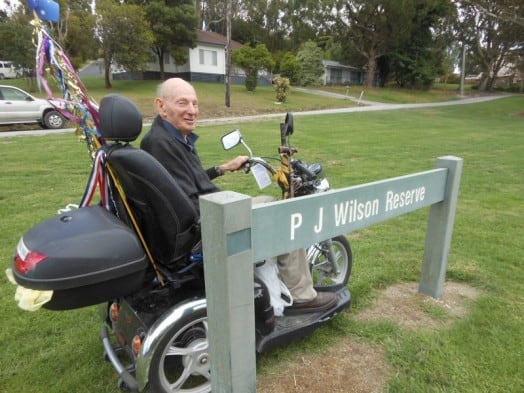 • “This land is our land” – Jim Wilson at P J Wilson Reserve in Berry Street, Foster.

IN WHAT many are hailing as a victory for the Foster community, South Gippsland Shire Council has resolved not to go ahead with its controversial proposal to sell a block of land in Berry Street, Foster.

“I see it as an example of people power,” said retired Foster solicitor Jim Wilson, who has led a campaign of protest against the proposed sale.

Mr Wilson has long maintained that back in 1967 he and his late wife donated the block of land at 2 Berry Street to the then Shire of South Gippsland for use as community parkland and as a memorial to his father, a prominent citizen of the district. The land bears the name P J Wilson Reserve.

Council argued that the land was not gifted or donated but was part of a development contribution when the surrounding area was subdivided.

Council’s Special Committee for the Strategic Land Review Project met on Tuesday last week to hear submissions on the Berry Street block and some of the 22 other parcels of land judged to be surplus and proposed for sale for fundraising purposes in the 2015/16 financial year.

Backing up claims he has already made in numerous letters to the press, the council and various levels of government, Mr Wilson addressed the Special Committee, arguing the case against selling the land, as did fellow Foster residents Meg Knight and Paul Ahern.

When it came to the vote, only two councillors – Jim Fawcett and Lorraine Brunt – wanted to go ahead with the sale. The majority of councillors present – Crs Mohya Davies, Nigel Hutchinson-Brooks, Jeanette Harding, Bob Newton and Andrew McEwen – voted against the sale of 2 Berry Street.

“I appreciate that the shire council is giving due consideration to the wishes of its ratepayers,” said a very relieved Mr Wilson when he heard the good news.

The elderly retiree said he has endured a very worrying few months, and he thanked the many people who have supported him in his campaign by making submissions, writing letters or circulating/signing a petition, which at last count carried over 500 signatures.

Mr Wilson said he understood that the land would now be rezoned from residential to parkland and he hoped it would be planted out with gardens.

By the time the Special Committee concluded its proceedings on Tuesday a determination had been made on 20 of the 23 parcels, with the remaining three lots to be referred to Council for a decision at its next meeting on February 24. These lots are at 21 Smith Street, Leongatha; 1A Canterbury Road, Venus Bay; and 1A Noble Street, Venus Bay.

Councillors agreed to sell most of the parcels of land, including:

In addition to the Berry Street parcel, the committee resolved not to sell 37A Centre Road, Venus Bay.

Further details are available in the Council Meeting Agenda papers on Council’s website.

Conscious that land sales are a contentious matter, Council’s manager of sustainable communities, Chris Van Der Ark, said: “There will be some in the community who may not understand why Council is opting to sell some of its land holdings. It is important that our community recognise that this process commenced in 2010 and has continued throughout the term of the current Council. Over the past five years Council has consulted extensively with its community, as evidenced by various media releases, information on its website, letters to stakeholders and adjoining landowners, and attendance by Council officers at community meetings.

“Council has a legacy issue from the time preceding Council amalgamations. There are small blocks right across our Shire, many of which serve no purpose to our community. In fact, there is a risk that they become the sort of nooks and crannies that attract unwanted behaviour such as dumping of rubbish or improper use by adjoining landowners. This project is our opportunity to take the capital locked up in those legacy assets and to re-allocate it to projects and services that are priorities for our community now and into the future.”

“The submissions that were heard on Tuesday were part of the process that Council is bound to follow when selling its land assets, as articulated under Section 223 of the Local Government Act. Built into the process is public advertisement of Council’s intent and a call for public submissions. This is the process we have followed for these 23 lots and the process we will be bound to follow for all future lots proposed for sale under Council’s strategic land review,” concluded Ms Van Der Ark.