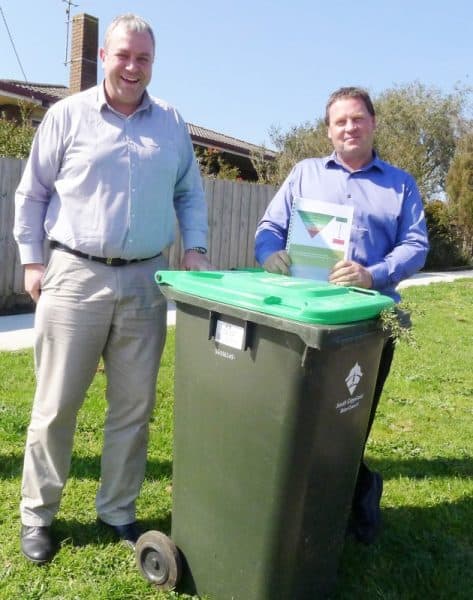 A REPORT on the success of South Gippsland Shire Council’s Kerbside Green Waste Collection was presented last Wednesday to Council, and was applauded as having significantly decreased the amount of green waste which prior to the introduction of the service, had added to landfill gas production and leachate generation.

Peter Roberts – Council’s Waste Management Supervisor and Geoff McKinnon, Council Sustainability Co-ordinator explained that since the service began in July 2015, an overall reduction in kerbside garbage to landfill was achieved despite a large number of additional properties being added to the garbage collection service in Venus Bay.

Taking into account the addition of the Venus Bay services, the actual amount of kerbside waste to landfill from each property (on average) reduced from 411kg to 337kg per year, a reduction of approximately 18 per cent.

In July 2014, Council approved the introduction of the Green Waste Collection Service to be delivered on a fortnightly basis and commence in the 2015/16 financial year.

The Service is compulsory for all residential properties receiving a kerbside collection service unless the property is:

Properties that fall under any of these categories are able to opt in if they choose.

At the time the service was introduced, a small number of complaints were received from residents not wanting the service predominantly due to concerns with the additional cost. However, positive feedback was also received from members of the community in favour of the service.

When the service commenced in July 2015 there were initially 6937 participating properties, which increased to 7113 by July 2016. Approximately 250 of these properties are exempt from the service, but have opted to have the service.

The service has been well utilised by the community with 1700 tonnes of green waste collected during its first year, significantly more than the 1000 tonnes that had been anticipated. The service is delivered on the basis of full cost recovery with all costs associated with the collection, transport, and processing of green waste recovered through garbage charges levied on participating properties. The service cost was $532,000 for the 2015/16 year.

Due to contractual arrangements and the anticipated high costs of transporting all organic waste long distances to an appropriately licensed processing facility, the introduction of a full organics collection service (which would include food waste) is not currently viable.

However, South Gippsland Shire Council is very interested in the possibility of introducing such a service in the future and will be conducting an investigation into viable composting options for a full organics collection service.

To assist in evaluating the viability of the service becoming a full organics collection (food and green waste) in the future, $20,000 has been allocated in the 2016/17 budget to investigate viable composting options.

The full organics waste service already in place at a number of other councils in Victoria, and that of Bass Coast Shire Council (operational as of September 1, 2017), will – it is hoped – provide Council with the opportunity to monitor the success of such a service.