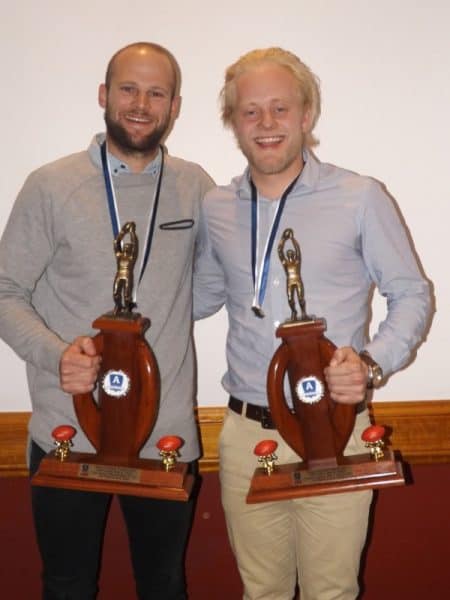 Both players polled 27 votes. Chris was an early leader in the count, before Tom flew home to join him on 27 in the last round of the season.

After five rounds were completed, Chris had received 12 votes, four ahead of James Phillips of the Allies on eight, with IK’s Daniel Reid, MDU’s Tom Corry and IK’s Corey Casey all on seven votes.

Chris continued to poll well, and at round 10 he had gone out to 19 votes, an eight-vote lead over Tom from MDU and Corey of IK, with Tarwin’s Paul Hinkley and Foster’s Matthew Clark moving to 10 votes.

With three rounds to go, Chris had now reached 25 votes, but Tom had started his run and was now seven votes behind on 18, followed by the Allies’ Darcy Atkins, Foster’s Matthew Clark and Kilcunda Bass on-baller Ryan Fitzgerald on 16.

It is Chris’s second league best and fairest. He won it two years ago and was runner-up last year. He is one of the league’s premier midfielders.

He said he was honoured to win the award again but didn’t think he had had that good a season. He also wished the sides competing in next week’s grand finals all the best.

22-year-old Tom is in his first season at Fish Creek and is also a Sandringham VFL listed player. He plays on-ball for the Creek and is one of the reasons they are competing in this week’s grand final after such a fine season.

He thanked all his teammates and the Fish Creek Football Netball Club for their support and concluded by saying he hoped they “get the chocolates” in next week’s grand final.

The night commenced with the C grade netball vote count which was won by Korumburra-Bena’s Amy White on 30 votes from Dalyston’s Emma Ton on 29.

This was followed by the B grade netball, with Melissa Harris of MDU winning with 30 votes from Jamie-Lee Jeffs of Korumburra-Bena on 25.

MDU reserves captain coach Peter Harris was a popular winner of the reserves award with 28 votes from previous winner Dale Brown of Dalyston on 26.

The A grade netball award went to Christie Hillberg of Korumburra-Bena. It was Christie’s sixth award, a fine achievement in anyone’s language.

Lawrie Piera of Phillip Island was runner-up with 26 votes.

The Most Disciplined Club Award was presented to the Inverloch-Kongwak Club and accepted proudly by Russell Miller.

Netball and football teams of the year were announced, with most of the players selected in attendance to receive their coveted awards.

League president Barry Stride was unable to attend the night due to ill health, but Neil Park did a great job as MC for the night and Lynn Whelan again did a fantastic job with the PowerPoint presentation of all the awards.

The Workmen’s Club provided a first class venue and meal, with Phillip Island the host club for the night.

All that is left for the season now is AFNL Grand Final Day at Meeniyan on Saturday. In the senior football, Fish Creek will be playing Inverloch-Kongwak, and it should be another classic Alberton grand final.