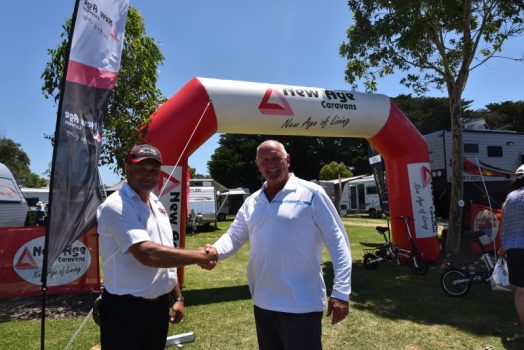 FOSTER Football Netball Club’s inaugural Foster Outdoor Expo got off to a good start last weekend. Already organisers are confident it will become an annual event.

Gary Bullen, from the organising committee, estimated the total number of people who passed through the gates of the Foster Showgrounds over the two days of the expo at between 3000 and 3500. “That’s going by the gate takings, but it’s quite hard to be exact as the visitors included a lot of concession card holders. All in all, we’re extremely happy with how it all went,” said Mr Bullen, ascribing the success of the weekend to “a great team effort”.

He conceded that Saturday’s extreme heat probably had some impact on numbers. “It was the perfect day for the beach and the high temperatures probably kept a lot of people either at the beach or indoors. I made a few phone calls and it was the same story at events across Victoria – so I would like to thank all those people who braved the heat and ventured out.”

From amazingly luxurious caravans to drink and toilet roll holders for campers and everything in between, from fishing and garden products to four-wheel-drive accessories, leisure gear and clothing, cooking and furniture, there were stalls and stalls at Foster Showgrounds of interest to anyone who loves the outdoors.

Werever 4×4 Accessories was one of the most popular stalls, while the electric bikes at New Age Caravans Gippsland were a great hit. New Age, the expo’s major sponsor, sold a remarkable number of bikes as well as several caravans. Unsurprisingly, many a tired expo visitor found it hard to go past the stall selling Cloud 9 deluxe hanging chairs without being enticed in for a rest.

Effervescent Ranger Nick’s regular cooking demonstrations attracted good numbers, with parents pleased to know they could leave their children to be entertained at the nearby jumping castle.

There was a great variety of food and drinks on offer, from spit roasts and BBQ fare to Craig’s Hut iced coffee, beer and wine. In the hot conditions, slushies and ice creams were the pick of many.

The stallholders were overwhelmingly happy, said Col Pulham, another of the organisers of the huge event. There were around 60 stallholders, some from the local district, many from further afield who are part of a semi-regular outdoor expo circuit and remarked that the Foster expo was a great effort by first-timers.

“Many of the stallholders have said they will be happy to come back next year,” said Mr Pulham.

Mr Bullen corroborated this, saying that he had spoken to every one of the stallholders and at least 50 of the 60 or so had vowed to return to Foster.

“Many exhibitors said that they especially enjoyed working at our expo because it was community-run. They also said it ran very smoothly and they were well looked after,” he said.

A fly in the ointment was the no-show by BCF Traralgon. “They pulled the pin late the night before the expo, which was very disappointing given we had been promoting their attendance in all our advertising material and we know that a number of people were coming along specially to see them,” said Mr Bullen.

Mr Bullen said he had lots of positive comments from members of the public who attended the expo, with several commenting that it was good to see the community running such an event in Foster.

Now, with the groundwork laid at this inaugural event, he has every expectation that the expo will become an annual event, welcoming even more caravans, boats and outdoor toys, gadgets and luxuries in the years to come.