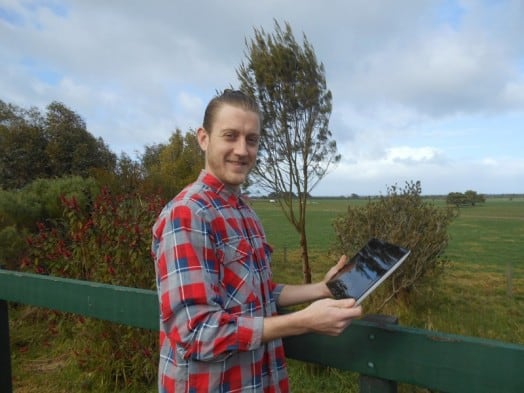 • Aaron Gilbertson in his home office at Toora, where his NBN fixed wireless connection provides him with high-speed internet access. On Monday, when this picture was taken, the download speed was well over 40 Mb/s.

AS THE rollout of fixed wireless technology continues, more and more regional Australians are connecting to the National Broadband Network, relishing the opportunity to access reliable broadband at dizzyingly high speeds.

Aaron Gilbertson of Toora is one satisfied consumer of the latest technology.

He was lucky enough to move to Toora just as the NBN was being rolled out in the area. When he arrived in December 2013 with his partner Louise, a teacher at the local primary school, they had to make do with a clunky ADSL1 service, which required an active phone line. Within months, however, Aaron was able to sign up for the NBN. Now he can download content at an average speed of between 25 and 30 Mb/s (and sometimes well over 40Mb/s) and upload super-fast too.

“The connection I have is now allowing me to work seamlessly from home,” said Aaron, who works in Traralgon as a development and tech support specialist at Scribblevision.

“Because of the large files I am uploading and downloading I need the speeds the NBN offers to be able to do my job. The NBN was definitely a determining factor in helping me decide where I might want to live when I moved from Melbourne.

“I get faster speeds now than I ever imagined, even living just outside the CBD a few years ago – I love going back to the city and boasting about my connection to my tech-savvy mates. Most are still on ADSL2. My speeds are twice as fast and yet we’re paying the same!”

Aaron decided to go with Telstra and opted for a bundle which included Foxtel and a mobile service. “That way there’s only one bill and one provider to deal with. And it’s not expensive.”

NBN’s fixed wireless network provides high-speed internet access to communities that are outside major towns and cities. The rollout of fixed wireless technology across Gippsland now means more than 40 towns, and 12,000 homes, can connect to the NBN. In the local area, fixed wireless is available at Toora, Welshpool, Fish Creek, Yanakie and Port Albert. It became available around (but not in) Foster in May 2014 and outside Yarram earlier this year. By the end of the month it will be available at Dumbalk, Meeniyan, Stony Creek, Koonwarra and Ruby. For full details – and to check the availability at your home or business address – go to the NBN website.

“The NBN not only presents new opportunities for development and growth, but also helps to bridge the gap between cities,” she said.

“Across Australia we are seeing the way the NBN is making a huge difference to the way the businesses operate.

“For the first time there are many small Gippsland towns and localities who have access to high speed, reliable broadband they may have never thought possible.”