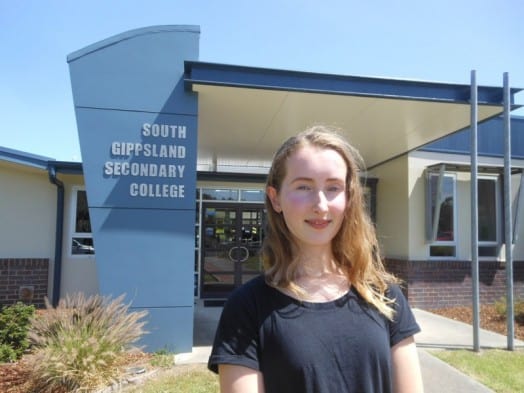 • Chloe Wood is the top student among an impressive group of high achieving VCE students in South Gippsland Secondary College’s Class of 2015.

HARD work has paid off, with some brilliant results among the VCE class of 2015 at South Gippsland Secondary College in Foster.

When the Australian Tertiary Admissions Rankings (ATARs) were released this week, they showed that three students at the school had attained an ATAR above 90 and most had received a ranking which would allow them to follow their chosen career path.

Among the 35 VCE students (there were also about seven VCAL students in the year) there were 13 study scores of 40 or above (out of 50), including two perfect 50s for individual subjects.

The top result of 98.45 was attained by Chloe Wood, who achieved a perfect 50 for both English and Literature. This was in addition to a 40 for English Language last year, when she was in Year 11. Chloe now plans to study Arts at the University of Melbourne, with a view to following that up with Law.

Emma Fletcher also did extremely well, attaining an ATAR of 95.5, including study scores of 43 for Further Maths, 40 for English and a 43 last year for Biology. She plans to study Biomedicine at the University of Melbourne, majoring in Bio-engineering.

The third high achiever is Harley McDonald-Eckersall. She is very happy with her ATAR of 93.6, which should easily qualify her for a Bachelor of Arts at Monash University, where she plans to major in theatre. (She has starred on the local stage with FAMDA in recent years.) Harley achieved study scores of 43 for English and Legal Studies and 42 for Media Studies, as well as 40 for Psychology when she was in Year 11.

Principal Matt McPhee expressed great pride in the achievements of the students and congratulated all who had worked hard to achieve their goals.

“This confirms what I have long believed about this school,” he said. “We have the circumstances whereby kids can achieve results as good as any school in the state.”

Mr McPhee said that South Gippsland Secondary College has lots of programs to cater for students across a range of abilities. “But academic excellence is our goal. To have academic excellence as evidenced by this year’s results is validating for us.”

He suggested that as well as putting in lots of hard work the students had benefited from a major reform at the school this year. This was the creation of a VCE Study Centre, a supervised quiet study space where all VCE students were expected to be when they had a “free.”

“It gave them far better access to their teachers and additional help,” Mr McPhee explained. “I’d especially like to recognise the efforts of teachers Julie Jones, Mark Tudor and Sandi Abberton, who volunteered all their free time to make that possible.”

He added: “What is also unique about this school is the degree of personal monitoring and support the kids get through the year from the co-ordinating team and teaching staff. I haven’t seen the like of it at any other school.”