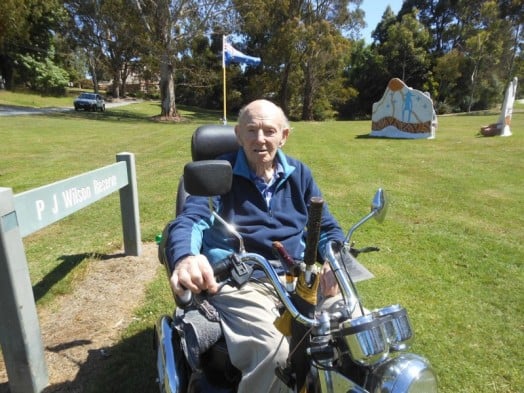 • Jim Wilson on the land under contention at 2 Berry Street, Foster. Beside him is the sign paying tribute to his father, in the background the newly installed sculptures.

JIM Wilson is standing firm as the dispute escalates over South Gippsland Shire Council’s proposal to sell a block of land in Berry Street, Foster, as part of the council’s Strategic Land Review project.

The retired Foster solicitor maintains that he and his wife gifted the land at 2 Berry Street to the former Shire of South Gippsland for use as a park for the public’s benefit and as a memorial to his father, a prominent citizen of Foster. He has searched out the documents which he considers verify the transaction of the land, known as ‘PJ Wilson Reserve,’ and has been buoyed by the support he is continuing to receive from members of the Foster community who are almost as outraged as he is.

A petition is now in circulation, asking that Council remove the parcel of land at 2 Berry Street from the list of land to be sold.

Mr Wilson has penned a letter to the editor (see page 10) in response to the council’s insistence (as reported in The Mirror 2/12/15) that the land in question was not donated “but was part of a development contribution when the surrounding area was subdivided”. The council view is that “the alternative would have been for the subdivider to have provided a financial contribution to Council”.

As Mr Wilson points out in his letter, the land he subdivided at a later date was unrelated to the Berry Street land. Furthermore, he took the responsibility of paying any fees due by the shire council to the Titles Office.

“I considered that this would be sufficient in place of an exchange of cheques, and this was acknowledged by Jim Rennick as Shire Secretary in his letter dated September 15th 1967 – “Your offer to carry out this transfer without cost to the council is greatly appreciated”,” states Mr Wilson.

Mr Wilson said that the transfer specifically states that “the consideration for the transaction is our desire to make a gift of the said land to the President, Councillors and ratepayers of the Shire of South Gippsland”.

If that is not proof enough, Mr Wilson also has a letter from Jim Rennick (dated 11th August, 1967) which states: “The Council is also agreeable to your suggestion that this land be accepted for recreation purposes in lieu of any provision or financial contribution being made by you in the event of you subdividing other adjoining land at present in your ownership fronting on Kaffir Hill Road, in accordance with Section 569B (8A) of the Local Government Act.”

Mr Wilson said he found it confusing that in July the council approved of the use of the land as a sculpture park – which has since been developed – and now only months later is giving notice of its intended sale as surplus to its needs.

The matter, added Mr Wilson, is far more serious and important to him and his family than the mere “kerfuffle” it was described as in The Mirror. The octogenarian hopes it can be cleared up satisfactorily before it takes any further toll on his health.

Meanwhile, in neighbouring Fish Creek, the community is taking a pro-active approach to the council-owned land known as Buckley Park, hopeful that by doing so Council will never consider the land “surplus to the community’s needs” and therefore ripe for sale.

Known for many years as the ‘top ground,’ the five or so acre plot on the Meeniyan-Promontory Road adjacent to the Celia Rosser Gallery was widely used as a sports ground until the 1960s when Terrill Park took over as the main sporting venue for Fish Creek. Over the ensuing decades the activity level at Buckley Park has gradually diminished. Now not even junior cricket is held there.

Representatives of the Fish Creek Community Garden group recently approached the Section 86 committee responsible for Terrill Park and Buckley Park with a request to use a portion of Buckley Park. The garden group wants to use the land for an orchard, garden beds and other gardening pursuits, as the group’s site at the old Fish Creek station is very small.

The committee called a public meeting last week to gauge public opinion, and the public responded enthusiastically. Around 40 people turned up to the meeting at the Fish Creek Bowls Club, keen to make their views known.

Committee president Keith Straw and secretary Robin Smith set out the details of the request from the garden group and there was unanimous support for the community garden. Mr Smith said that a formal arrangement to turn over an acre or so of the ground to a community garden will now be put in writing and the issue will be revisited in a year or so to see how it is progressing.

Catherine McGlead, a member of the community garden group, expressed great satisfaction with the decision. She said that it was good to see the community making use of the land. Someone at the meeting, she added, had suggested that the Buckley Park land may have been gifted to the shire many years ago.

“I think we should be pushing for all gifted land to be placed under covenants so that it can’t be sold or leased for commercial gain,” she said.