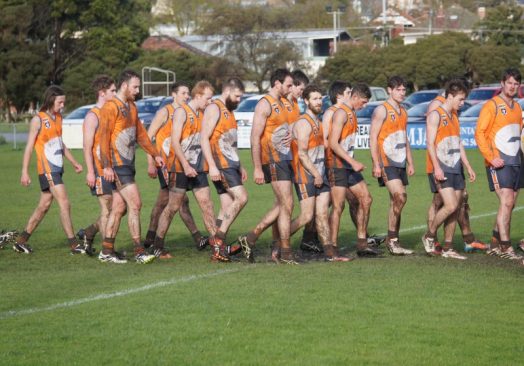 AN OVERWHELMING feeling of relief is how Korumburra-Bena president Ross Besley has described his feelings upon hearing that the club has won its appeal to go into the new West Gippsland Football Netball Competition next season.

Ross told The Mirror that the club was buoyant at the decision, with everyone around the club ecstatic with the news.

“Even the netballers and young fourths players were coming up to me saying they were thrilled with the outcome,” he said.

The club held a special meeting on Monday night to formalise plans for the coming season, with coaches and playing list high on the agenda.

Alberton Football Netball League president Barry Stride told The Mirror that the league has been in contact with Australian Football League (AFL) Gippsland and is not happy being left with seven sides.

He said that the league had been promised a minimum of eight teams by AFL Gippsland and will accept nothing less. “It’s up to AFL Gippsland to fix the problem, it’s got nothing to do with us or Korumburra-Bena leaving,” he said.

“At no stage has the Alberton Football Netball League been involved in any of the discussions about the new league and what clubs were going to form the AFNL. We had no say at all!

“The remaining seven clubs will be discussing the situation this week, and we will be meeting with the powers to be very soon to try and sort out the future of our league.

“A seven-team competition will not survive. The standard will drop, and maintaining players will be a major concern for all clubs.

“We have not created this problem, it’s not up to us to fix it,” Barry concluded.

AFL Victoria and AFL Gippsland put out press releases late last week outlining the decisions regarding the appeal. They are printed below:

Having considered all evidence provided, the Appeal Panel believes that the long term sustainable future of KBFNC is in the West Gippsland Football Netball Competition and not the Alberton Football Netball League as outlined in the AFL Gippsland – Senior Football Review.

The Appeal Panel is satisfied the Alberton Football Netball League can be a strong and vibrant competition in its own right similar to that of other such like competitions across the state.

AFL Victoria CEO Steven Reaper applauded the process undertaken by AFL Gippsland and the thorough and consultative approach in their review of footballing structures in the region.

“I cannot speak highly enough of the work AFL Gippsland and in particularly Travis Switzer and Brian Quigley have done with its Senior Football Review,” he said.

AFL Gippsland devoted a significant amount of time and energy collecting and analysing relevant data and consulting with clubs and leagues to determine the final recommendations.

We believe the review process was conducted thoroughly and in the best interests of football in Gippsland.

AFL Gippsland acknowledges the appeal decision is final and will move forward with the remaining Alberton Football Netball League clubs to ensure they are part of a thriving and sustainable competition into the future.

AFL Gippsland will make no further comment regarding the matter.