MINISTER for Regional Development Jaala Pullford was in Foster on Monday to announce $50,000 in funding for new tiered seating for the Foster War Memorial Arts Centre.

After a brief afternoon tea, she walked down the street to celebrate the State Government-backed Foster streetscape revival.

“For the past 25 years FAMDA has been using great, big bulky boxes to create tiered seating. We built them when we did Fiddler on the Roofin 1993. That’s how old they are. They’re really heavy, hard to manoeuvre,” she said.

“They’re stored in a shed, so that the volunteers had to set them up – and it was really hard work for the six or so muscular men who did it.

“They got to the stage where they weren’t compliant with building regulations either. So, we decided they had to go.”  She said FAMDA president Tania Pell had “worked like a little beaver to get enough people on board as sponsors”.

“You had to have the money there, earmarked. All the money we got from elsewhere ensured we were eligible to receive that $50,000 grant from the State Government,” Jennifer said.

She believes the tiered seating, which can easily be folded up stored, will be utilized by a number of other community groups. 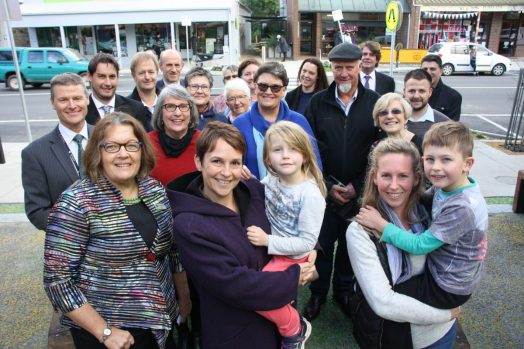 • Street smart: Minister for Regional Development Jaala Pullford celebrates with a host of other streetscape advocates on
Monday.

She said former councillor Mohya Davies had been a “parochial advocate in Council”.

“The project would not have been possible without the support of the Victorian Government and we are grateful for the $500,000 contribution from the Regional Jobs and Infrastructure fund. Thank you Minister Pullford for your support on such a vital project for our region,” she said.

“Council is also appreciative of the dedication of the Foster Chamber of Commerce and the Foster Community Association, and their drive behind the projects.”

Minister Pullford said she was happy to be able to celebrate the near completion of this “really significant project”.

“This just looks wonderful. It looks so fresh and lovely and wonderful. There’s been a lot of influence from the local residents and traders,” she said.

“I think that’s why you’ve got such a great result. This project is very much owned by those who benefit from it every day.”

Foster Chamber of Commerce president John Davies said aside from money and time the streetscape project had “taken passion from the local people”.

“The engineers tell us it’s important to get the infrastructure right, the marketers tell us we have to get the aesthetics right, but the community and small business owners tell us it has to be safe, functional and feel good – and I think it does,” he said.