Funding cancer research one swing at a time 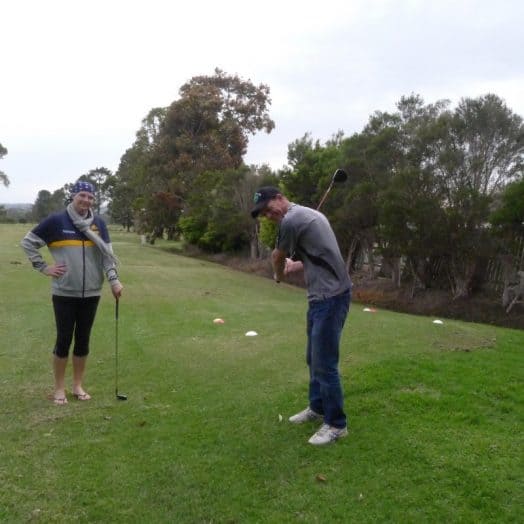 • Jen and Paul Delaney take time out for a bit of practice in the lead-up to Paul taking on the Longest Day challenge to raise money for cancer research.

THE Longest Day is an endurance golf challenge designed to test skill, strength and stamina. The challenge is to successfully complete 72 holes of golf on a single day between dawn and dusk in a stableford format. The challenge will take place at Welshpool Golf Club on Monday, December 19.

The Longest Day is to be held just two days after the actual longest day of the year (December 21) and is a Cancer Council initiative to raise funds to aid in cancer research.

Toora resident Paul Delaney has a very good reason and strong motivation for taking on the challenge; his wife Jen has follicular lymphoma which is a type of non-Hodgkin lymphoma. It develops when the body makes abnormal B-lymphocytes – the lymphoma cells, (B-lymphocytes are white blood cells that fight infection). The lymphoma cells build up in lymph nodes. The most common symptom is a painless swelling in the neck, armpit or groin.

Jen had originally noticed a small lump behind her ear. It didn’t hurt. The doctors thought it was a cyst. When the lump grew in size Jen had it checked again, this time by ultrasound. She was told that ‘it looks too pretty to be cancer’ as it was perfectly round.

A sample of the lump was taken and the doctor told her the lump was a benign tumour. Nothing showed in a blood test as there are so many forms of lymphoma that it’s not possible to test for all at once.

Four days later Jen received a call from the Gippsland Cancer Care Centre at Latrobe Regional Hospital in Traralgon where the sample had been sent. She was told that the results were inconclusive and that the lump should be removed. Following its removal and three rounds of chemotherapy, Jen and Paul are absolutely thrilled that she is now is remission.

“It pays to get lumps which you think may be glands or cysts checked by a medical professional and if you’re given the all clear, rejoice – but if you’re at all uncertain, get a second opinion first to be absolutely sure,” Jen advised.

“I’ve seen how the Cancer Council operates and the Gippsland Cancer Care Centre at Latrobe Regional Hospital and they are amazing”, Paul said. “This one day will be a bit tough for me, but it’s a walk in the park compared to what Jen and so many others have gone through and are going through. It’s not much really, but it’s one way in which I can help.

“Please join me in the fight against cancer by using the ‘Give Now’ button on the Welshpool Golf Club’s facebook page to sponsor me in this game of skill, strength and stamina,” Paul urged.

Within two days of registering with the Cancer Council to raise funds, Paul had raised $1000, with some donors stipulating to the Ford man and keen Geelong supporter (rather ‘tongue in cheek’) that he’ll have to wear a Holden T-shirt or perhaps a Carlton cap.

“If they want me to wear something in particular they will have to supply it, but if they’re willing to donate money, I’ll wear it,” Paul said.

“This event is to raise funds for skin cancer, but if they can find a cure for that one type of cancer then maybe that will lead to finding a cure for other types of cancer as well,” he said.

By following the link   www.facebook.com/welshpoolgolfclub   the funds donated to the cause will go directly to the Cancer Council.

As The Mirror goes to print, Paul has so far raised $1500 and it is his and Jen’s hope that readers will jump on board to help raise additional funds for cancer research.

So, come on down to the Welshpool Golf Club and urge Paul on as he tackles 72 holes of golf on the Longest Day.