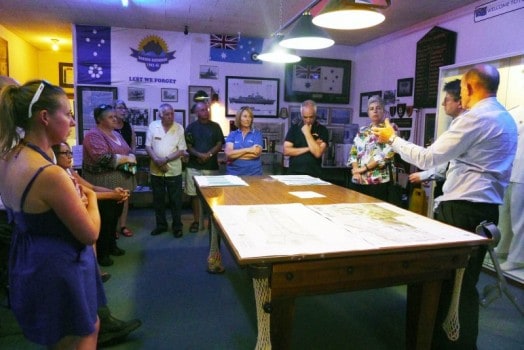 A GROUP of Foster traders/business owners attended a drop-in session convened by the South Gippsland Shire Council to discuss plans for the proposed Foster Streetscape Project.

The meeting took place last Thursday at the Foster RSL Sub-branch. It was well attended by local business operators, the majority of whom expressed the view that although the project is a positive move for the township the timeframe of the works is all-important. It will be this that could determine whether the project is of long-term benefit to the livelihood of local business operators.

The design has been developed over a number of years in consultation with the Foster Community Association with input from the Foster Chamber of Commerce and more recent input on landscaping/street furniture from the broader community.

“The design for the streetscape is based on making the environment more pedestrian friendly by slowing traffic down and providing more opportunities for pedestrians to cross,” said Mr Moylan.

The design of the streetscape is consistent with Main Street reverting to local road status, with McDonald and Power Streets becoming the arterial route in accordance with preliminary discussions between Council and VicRoads.

The works include the closure of the lane between the pharmacy and the newsagency opposite the hotel. This will necessitate the extension of the access road behind the shops around the rear of the Uniting Church onto Station Road.

Mr Moylan pointed out that drainage improvements are of the utmost importance and that the Streetscape Project can only go ahead with the drainage issue addressed.

The intended timeframe for the project would see an Economic Impact Study, Grant Submission lodgement, detailed design and preparation of tender documents being completed January/February. The expected confirmation of grant success could be announced in June, followed by the advertisement of Tender the following month and the contract being awarded in August – meaning that the construction phase would take place between September to December.

The general consensus amongst traders was that the Streetscape Project would be a positive thing for Foster and that if it is to go ahead, it would make sense to have it occur on the back of the planned drainage works. However, many voiced concerns that although Council would do all that is possible to ensure that the construction phase was outside of peak holiday times, these months are very much a major part of the busy season and construction on roads, footpaths, etc., would therefore be likely to have serious impacts upon their businesses.

“This proposed timeframe for construction takes in the majority of the busy season, which this year started early due to the Grand Final long weekend, and may do so again,” said a local trader.

“Most of the businesses along Foster’s Main Street depend on the commerce derived from tourism to get them through the year. If the main street has limited access for cars, difficulties for pedestrians and very limited parking, it will be an unattractive option for visitors,” he said.

“Those living in other neighbouring towns who depend on the services of Main Street traders may find it easier to go on to Leongatha or Wonthaggi and once they become used to the options at either town, may not come back. We could lose their business and in turn, perhaps lose our own,” commented another business owner.

“Even if the work is carried out in sections, it will still have serious impact on the accessibility of our shops and services to our customers.

“Around 200 people work along Foster’s Main Street and if we were to lose even 30 per cent of our regular trade, there would be 60 people whose jobs may be on the line because the businesses are no longer generating the monies to keep them employed,” he said.

In planning the Tender/Construction phase, council would be putting into place measures to hopefully mitigate problems, such as ensuring that the Tender documents have a clear and concise section alerting prospective tenderers about the need to minimise the impact on businesses and to work with traders/shop owners.

Council would ensure that the successful tenderer had proven success in the delivery of works within a CBD, and close liaison would be maintained between Council, the traders and the contractor during construction.

Traders voiced concerns that works to improve pedestrian access would interfere with access during the construction phase, therefore making it preferable to have the works carried out during a quiet period of trading, such as between May to August.

Mr Moylan pointed out that carrying out the construction phase during the winter months would have its own set of problems, such as increasing the chances of bad weather extending the phase by as much as a couple of months – taking it again into September/October.

“If the funding is there, this project will go ahead and it may take three to six months,” said a business operator.

“In the long term, it is a positive move and I believe all the business operators are in favour of it, but we know it will be a tough time to get through and hope that a contractor will be found who is sympathetic with the requirements of local traders.

“Foster is already a beautiful town and we are very lucky to live and work here. We need to keep in close contact with Council and between us all make sure that whatever changes are made can be justified in terms of adding to the economic development of Foster,” he said.