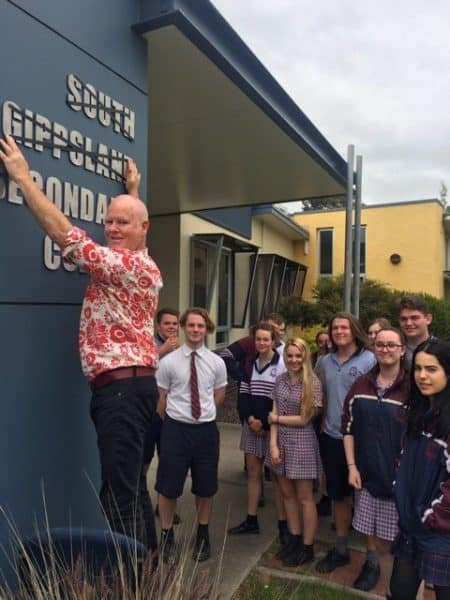 The new name of ‘Foster Secondary College’ has been approved by the Registrar of Geographic Names and will be published in the Victoria Government Gazette tomorrow (December 8), officially changing the school’s name.

The secondary college is situated in Foster and serves the local district, including Fish Creek, Toora, Yanakie and the surrounding area. It has been known as South Gippsland Secondary College for the past 26 years.

“Before that we went by Foster and District High School,” said the school’s long-time Business Manager, Colleen Smith.

The school investigated changing its name in 2002, but there was insufficient support for the move.

Earlier this year, Matt McPhee, who became Principal in 2014, led the school’s management team to renew efforts to change the name, and after much work, including consultation with the community, that change has finally occurred.

“It’s an important change for all of us,” said Mr McPhee. “We are based in Foster and it makes sense to be known for the town in which the school is located. We love our local community which includes all our surrounding towns, but South Gippsland stretches from Mirboo North to Tarwin and Lang Lang to Yarram – far beyond our reach as a school.

“For administrative purposes it makes sense and will certainly make it easier for people coming to our school to find us and to associate our school with an area of Victoria.

“We can’t wait to be known as Foster Secondary College and to continue the terrific service our school provides the local community day in and day out,” Mr McPhee said.

The school community is now considering new logo ideas and the school will begin transitioning its branding to the new school name immediately.

Families can relax about uniforms, however.

“We did not want any financial impact from the new name so have reassured parents their students can wear out uniforms with the old name and logo,” said Mr McPhee.