Foster Medical Centre bigger and better than ever 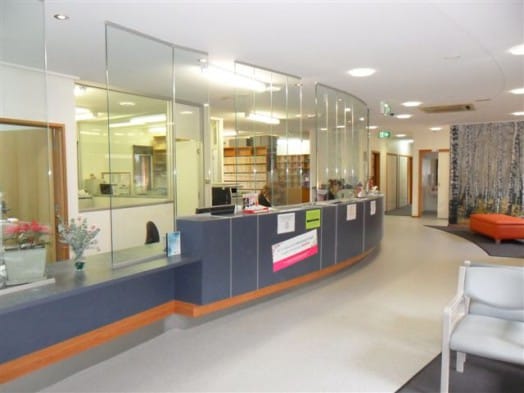 THE pride of the local medical fraternity and the envy of regional communities across Victoria, the expanded Foster Medical Centre had its official opening on November 5.

The medical centre, now more than twice its former size, was extended with the help of a $550,000 federal government grant.

The expansion will allow the medical centre to provide rural placements for medical students from Monash University’s Gippsland Medical School at Churchill and other universities.

“Today represents the culmination of a project which has filled us with anticipation and excitement, with reflections on the past and projections into the future, with at certain times self-doubt and dread!” said Dr Philip Worboys, one of the four principals of the medical centre practice, as he welcomed the crowd of around 100 people to the 2pm opening – and competed with the din from an incoming medical helicopter as he did so!

“To see a vision and concept become a plan and then a plan become a building and finally a building become a medical centre – this has been a gigantic project for us, and we are excited, proud and relieved that it has resulted in what you see behind me.

“We believe we see before us the physical bricks and mortar part of the future of medical services here.

“We hope that the old adage, ‘If you build it, they will come’ translates into a continual supply of quality doctors to help in the medical care of people in Foster and the surrounding district for the future. This was and remains our prime vision for this extension.”

It was then fitting that Dr Worboys invited fellow practice principal (along with Dr David Polmear and Dr Owen Casson) Dr David Iser to the microphone.

Dr Iser, who has a 30 year association with Foster Medical Centre, having been a founding member along with the late Dr Robbie Fleming, was a key driver of the expansion project and the necessary application for funds.

“This is truly a great day for the district,” he said and then gave a brief history of the events which had led to that day, starting with when the local Roman Catholic church had, in a great community spirit, offered land to the local health services.

Until today, he said, the medical centre had only been able to extend in small steps – there had been three extensions in 16 years.

“This new building should serve Foster for 20 years or more, taking it well into the future,” he said.

Dr Iser paid special tribute to a young doctor, Dr Joe Rotella, who as a medical student at Foster had alerted the medical practice to the availability of government funding to meet its aim of improving its facilities so it could train more doctors, nurses and other health professionals.

Dr Iser said that the medical centre would start taking interns from next year.

“Our training of students should be a great source of GPs in years to come,” he said.

Dr Iser further thanked the builders, Considine and Johnston of Leongatha, saying they had done a tremendous job and had managed to keep interruptions to a minimum.

He concluded by thanking the staff of the medical centre. “This is a proud moment for us all,” he beamed.

Dr Worboys introduced the member for Gippsland South, Peter Ryan, and invited him to say a few words and officially open the extension.

Mr Ryan praised the newly extended medical centre as “a triumph”, saying it “sets the standard” for regional medical centres across Victoria.

“It is testament to what has happened here over the decades. Foster is the envy of communities across Victoria – that such great doctors have practised and continue to practise in Foster,” he said.

Mr Ryan said the medical centre would play an important part in training doctors. He said it was vital for Foster to have appropriate health services, both to look after its permanent population and to see to the needs of the influx of holidaymakers into the area each summer.

There was one more task to be completed before dignitaries and guests could enter the beautiful new building and enjoy an afternoon tea provided by the South Gippsland Hospital Auxiliary. Dr Worboys invited Dr Joe Rotella to come to the front and lead everyone into the medical centre. “Joe has no idea we were going to do this, but we thought that it would be perfectly fitting if he led us into the new facility. As David mentioned,” said Dr Worboys, “in all probability without Joe’s input early on this whole project would not have eventuated. We would like to publicly acknowledge this now in the naming of our new educational room – where afternoon tea will be served – in his honour. It will henceforth be known as the Joe Rotella Room.”

A tour of the Centre

Appreciating the importance of the medical centre to the Corner Inlet community and the interest with which its expansion – a 12-month plus construction project – has been observed, medical centre management closed the centre for consultations on Friday, instead offering the public the opportunity to have a wander through between 10am and 12 noon and inspect the new facilities. Many people seized the opportunity.

The entrance is now on the other side of the building, the side closest to the community health centre. En route to the reception area, which has doubled in size, is a glass cabinet displaying medical memorabilia, most of which once belonged to Dr Fleming, a founding doctor of the centre. Dr Fleming – who used to practise at his Church Hill Road home – and Dr Iser were there when Foster Medical Centre first opened at its Station Road site in 1986.

An estimated 125 per cent larger than previously, the medical centre has eight new consulting rooms, as well as a meeting/education room for medical students.

Additional reception staff have been taken on to help cater for appointments with the GPs as well as visiting specialists, who have been steadily increasing in number and now include a general surgeon, urologist, cardiologist, two gynaecologists, an echo cardiogram specialist, a psychiatrist, psychologist and endocrinologist. Antenatal clinics are also held regularly.

In the spacious and light reception area the design skills of Lian and Owen Casson have been called into play. Photographs of a leaf magnified a thousandfold and a forest of silver birches form stunning backdrops on two of the walls, and the children’s play nook – the Cassons’ young daughter had input here – is colourful and inviting.

Up one end of the building the newly expanded treatment room, part of the nursing department, has ambulance access and now boasts five beds rather than just two. Nearby is a storage/sterilisation room and a non-sterile room.

“I absolutely love it. We are very lucky to have this facility here in Foster,” said office manager Tania Cripps.