Flooding of Stockyard Creek a difficult and complex issue 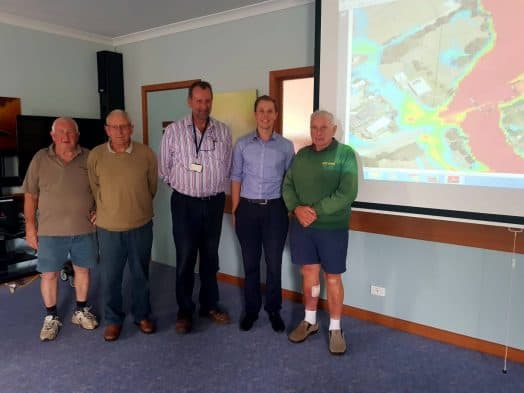 • Terry Holmes and Ross Munro (left) and Geoffrey McCraw (right) met with Geoff Davis from the Council and Nick Andrewes from Engeny (centre) to find out what the plan is to prevent the future flooding of Stockyard Creek.

ON Thursday evening a meeting was held at the Community Centre in Foster where concerned locals met with Geoff Davis from the Council and Engineer Nick Andrewes from the consulting company Engeny so that it could be confirmed that the model results Council has come up with are consistent with resident’s concerns.

“It is really consistent,” said Nick. “There are a couple of issues that we need to look at in detail but by in large it was consistent with what our modelling is showing.”

Geoff admitted that even when they apply for funding it will take a period of time before anything happens.

Local resident Geoffrey McCraw said he and most of the other people at the meeting thought it was all a waste of time.

“There is a lot of information to be digested and a lot of work to be done behind the scenes to produce what appears to be quite simple matters,” Geoff said.

Nick agreed and said that at the end of the day it was about being accountable.

“The great thing about today is that we’ve been able to put forward the model outcomes and have the flooding verified,” he said.

“It’s been great to get the feedback,” Geoff added.

“Apart from cleaning up the surprising amount of small plastic litter and rubbish alongside the Creek, we will start bringing down the large amount of climbing weeds that are smothering our trees and ferns. We will rescue the ferns,” said Tom Holman.

“I would encourage people concerned to be active with Friends of Stockyard Creek as this is more likely to be a co-ordinated community-led program rather than a unilateral one-off activity.

“It’s a creek. It will ebb and flow, flood and trickle. And we do want a creek and not a drain.”

John Moylan, Manager Infrastructure Delivery at the Council, said that with respect to the drainage outlet behind the chemist, Council is proposing to install a precast pit with a lower outlet closer to water level to reduce the scouring effect. Rock beaching will be placed around this outlet to prevent scour.

The PVC pipe behind the Post Office in Pearl Park will be extended under the gravel footpath with an outlet into Stockyard Creek. The footpath will then be reinstated.

It is expected that these works will be completed over the next month.