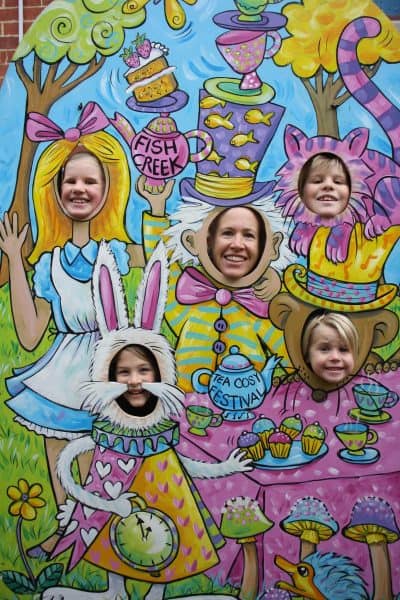 • Cosy tea-m: Isla, Leticia, Samara, Anouar and Bodhi were in the spirit of the festival.

THE Fish Creek Tea Cosy Festival enjoyed a huge weekend, with 1000 visitors estimated to have flocked to the event over the weekend.
“You just don’t dream about it being that successful. This is Fish Creek. But we were absolutely swamped,” Festival committee president Marge Arnup said on Monday.

She honoured Deidre Granger, who came to Fish Creek with her partner Luke Dearlove in 2011 as the new owners of the town’s post office. It was in Fish Creek Deidre inspired other locals to help her realise her seven-year dream of establishing a tea cosy festival.
“Deidre Granger was up there looking down on us. We’ve got a tea cosy goddess looking after us. The festival was so big. It’s just blown me away,” Marge said.

Marge said the festival’s Devonshire teas and high teas were packed, with more scones being made to meet the huge demand. There were also more than 180 entries in the tea cosy festival competition, which was judged by renowned tea cosy author Loani Prior.

“Our volunteers were run off their feet. And the kids from Fish Creek Primary school waitressed beautifully,” Marge said.
Speaking at the opening of the event – flanked by South Gippsland Shire Council’s Cr Alyson Skinner Marge and Member for Gippsland South Danny O’Brien – Marge said the festival was a “celebration of the practical, the quirky, the humble, the creative and the hospitable – all the things that epitomise Fish Creek”.

After working through “the shock and the grief” of Deidre’s sudden and unexpected death in November 2015, the committee pulled together to stage the 2016 festival in her honour, Marge told the audience.

“Now it has grown into a truly community festival – by our community, for the community of tea cosy festival lovers,” she said.

Cr Skinner said the festival was “a really fantastic demonstration of the community working together to build links with businesses, with craftspeople and with artisans – and to take that out to the broader community”.  She then led an impromptu rendition of I’m a Little Teapot. After some initial bewilderment, the packed hall took up the song and accompanying actions with gusto.

Mr O’Brien said the festival was “part of a growing artistic framework” in Fish Creek.  “I’d go as far as to say there’s something brewing here in Fish Creek,” he said, to both groans and laughs.  “I’m obviously straining through a good joke at the moment. Maybe I’ll Chaiagain.”

He also made a startling confession – admitting that his own entry in the men’s section of the competition (where he was one among three) may have been made by someone else.

“There has been a little bit of a scandal. You do have to tick a box and sign saying you, in fact, produced the tea cosy yourself,” he said.
“There is a beautiful tea cosy over there in yellow you might notice. I want to say I did have full artistic license, but I may or may not have done the work myself.”

Adding to the scandal, Mr O’Brien then took out his wallet and intimated he was willing to bribe judges to secure a prize for his entry in the competition.

Controversies aside, the community event attracted a rich array of characters, including Frankston’s Di and Joan MacDonald, who were madly knitting away as they chatted, with the expressed purpose of breaking the current Guinness World Record for the world’s largest tea cosy.

Eventually the tea cosy, which is being made by schoolchildren, café goers and others, will be “deconstructed” and made into rugs – which will be donated to KARAG, an organization that knits rugs for Frankston’s needy.