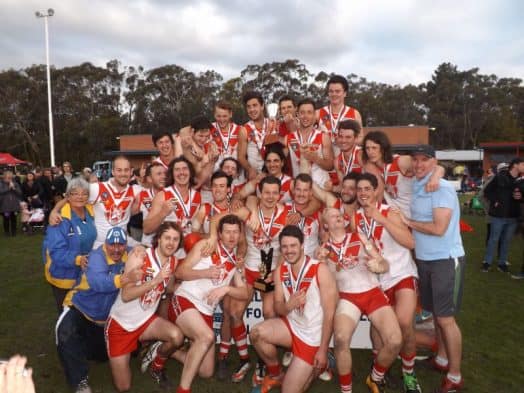 FISH Creek ended the 2016 Alberton Football Netball League season on a high note by winning the senior and fourths premierships on Saturday, defeating Inverloch-Kongwak in both games.

They also had their thirds in the grand final, but lost to IK in this match after ten of their fourths players had to play two games to make up the numbers. Their reserves were knocked out of the finals in week one, so the club has had a very successful season, one to be truly proud of under the leadership of club president Jason Harding and his committee.

The rain held off apart from a few brief showers during the thirds and fourths. The ground, surrounds and catering by the MDU Football Netball Club was a credit to them and all the hard work that they had done certainly paid off.

As stated Fish Creek won two flags, IK won the thirds and Dalyston won the reserves in the dying seconds of the match.

The netball flags were spread around with Dalyston the surprise winner over Korumburra-Bena in A grade, in what was a very physical and hard fought match that kept the big crowd on their toes.

It’s always good when the underdog gets up to win!

Prior to the senior matches on Saturday, both football and netball teams lined up for the National Anthem sung by Leongatha Primary School student Ashley Geary.

Fish Creek had the best three players on the ground as Matthew Kreymbog was awarded the South Gippsland Umpires award, Travis Manne got the Bill Pollock Medal and Callan Park got the AFL Vic Country award.

The day ran smoothly with quick presentations after each match which allowed the next games to start nearly on time.

The league board led by president Barry Stride and operations manager Lynn Whelan did a great job throughout the day and turned on a professionally, well run day which is a credit to them.

It was interesting to note that with five clubs leaving the AFNL for the new West Gippsland League, one of the remaining sides in Fish Creek was able to win the flag this season. Don’t you think that’s a bit ironic!